For some Israelis, Davis, California has long been a kind of household word due to the local UC specializing in agriculture.

By GEORGE MEDOVOY, SPECIAL TO THE JERUSALEM POST
MARCH 25, 2012 02:18
UC Davis Viticultue, Enology Dept_370
(photo credit: GEORGE MEDOVOY)
Advertisement
DAVIS, Calif. – If you’ve ever driven along Interstate 80 between San Francisco and Lake Tahoe, it’s likely that you’ve seen the exit signs for Davis, a small community of 60,000 in California’s Central Valley.For some Israelis, Davis has long been a kind of household word.Whether they come as students or on an academic sabbatical, Israelis have been attracted to Davis as the home of the northernmost campus of the University of California, and particularly for its famed Viticulture and Enology Department and the many other top science specialties.With Putah Creek meandering past sloping lawns, the campus still includes some of the original wood-frame buildings dating to the very early part of the twentieth century, when what would later become UC Davis was known then as the University Farm – a kind of step-child to UC Berkeley’s College of Agriculture.Today, of course, the Davis campus stands on its own, boasting some of the finest academic and research specialties in the world from medicine and genetics to plant physiology and the arts.One of the latest additions to UC Davis, the Robert and Margrit Mondavi Center for the Performing Arts, is named for the well-known California winery and plays host to top American and international performers.Mondavi makes a great entertainment venue if you’re coming to Davis, and it’s a good idea to check the schedule ahead of time when planning your trip here.Over the years, many of Israel’s leading winemakers have trained in the university’s Viticulture and Enology Department, whose spacious, ultra-modern, new facility borders twelve-and-a-half acres of experimental vineyards off Old Davis Road.On a recent tour of the facility, Dr. Karen L. Block, Industry Relations Manager, noted that the department’s in-house winery, used by students in their studies, attracts international notice for path-finding, sustainable features, including a system that captures rainwater to irrigate the winery’s landscaping.In 1983, Yosi Shalhevet, who served as chief scientist of the Agriculture Ministry in Israel and head of the Volcani Institute, spent a year-long sabbatical in the UC Davis Department of Land, Air and Water Resources.He later became Israel’s first official representative in Beijing, serving as director of the liaison office of the Israel Academy of Sciences and Humanities – a prelude to the establishment of full diplomatic relations between Israel and China in 1992 – and continued to serve as counselor of science and agriculture at Israel’s Beijing embassy.Shalhevet’s wife, Sheila, is the official in-house photographer of Save a Child’s Heart (SACH), the well-known Israeli medical organization, which provides lifesaving heart surgery to children from developing countries.Among her many duties is documenting the journey of every child coming through the program, and currently, she is also working on a book of her photographs of Ethiopia. 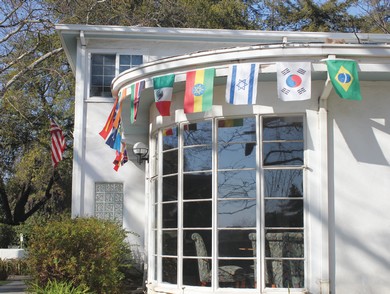 International House, Davis (George Medovoy)Her contribution to the couple’s Davis sabbatical was teaching Hebrew to young students at the local synagogue.The Israeli presence in Davis is reflected by the country’s blue-and-white flag flying next to others outside International House, an independent, non-profit organization promoting international student interaction with activities like free international movies, potlucks and art shows.It’s a relatively short walk from here to Hillel House, which is undergoing a major expansion in brand new quarters and often hosts Israeli-themed events.While it is well-known as the home of UC Davis, the central valley town is also famed for “bike power.” Often called the bicycle capital of America, Davis pioneered the concept of suburban bike lanes, many of which weave their way gracefully through suburban greenbelts.But if you’re interested in doing some serious biking, you can also head out along Russell Blvd., past historic, arching walnut trees, to enjoy the area’s flat terrain – great for biking – and go all the way if you like into farm country and the small town of Winters, about 14 miles away.For the “very serious” bikers, there’s always the Davis Double Century, which is sponsored by the Davis Bike Club.This year’s event, the 43rd-annual ride, is scheduled for Saturday, May 19 and will take riders on a 200-mile route through Yolo, Napa and Lake Counties. The event is open to a maximum of 1,000 riders.With all the emphasis on bikes, it’s no coincidence that Davis is also home to the US Bicycle Hall of Fame.You’ll find it housed in a modest building next to Central Park, where crowds gather on Wednesday and Saturday for the ever-popular Davis Farmers Market – and yes, many Davisites come to the market on their bikes, some with children in tow in a child carrier.For a peek at some of the town’s colorful history, you can always take the easy bike loop past historic Davis buildings.Among my favorites is the old Davis city hall, a Spanish Colonial Revival-style structure dating to 1938, which once housed city hall and the fire department, but is now the very cool City Hall Tavern, a place connected to Bistro 33, which offers both indoor and patio seating.Another stop I like along this route is the Dresbach-Hunt-Boyer Mansion, a two-story Italianate dwelling, circa 1871, at one time the home of William Dresbach, the first postmaster of what was then known as Davisville. Next door is the classic Varsity Theater, whose art deco, red-and-blue neon sign lights up the Davis night.The Varsity is one of three movie theaters in town, but its distinction, besides the wonderful signage, is that it screens films you won’t generally see in other theaters.A short hop away on this loop is the Southern Pacific Railroad Depot, built in 1913 in Mission Revival style, where Amtrak trains pull in and where you can also hop a commuter train for the San Francisco Bay Area and make a nice day trip of it.Davis also has a rather unique way of getting around that isn’t tied to bikes at all – it’s Unitrans, a university-operated bus system with student drivers, whose fleet includes vintage double-deckers from London with many of the original stops, like London Bridge Station, posted on the outside of the red buses.You can take a double-decker from the center of the university into downtown and beyond.Whatever you choose to do in Davis – whether it’s a visit to the university, going biking, or catching a performance at Mondavi – don’t forget to make time for a relaxing cup of coffee at one of the town’s numerous cafes.It’s yet another way to savor small-town living in a very special place with important Israeli connections called Davis.Follow @JPost_Lifestyle