The Korean Embassy in Israel recently hosted a Korean War Memorial Ceremony for the fourth year in a row.

By ITRAVELJERUSALEM.COM TEAM
JULY 12, 2012 15:26
Korean Embassy
(photo credit: Courtesy)
Advertisement
The Korean Embassy in Israel recently held a ceremony where they honoured the estimated 4,000 Jewish veterans who fought in the Korean War effort on behalf of the allies. In particular, four Jewish veterans were awarded with a special "Peace Certificate of Appreciation.”The ceremony took place in the central town of Rishpon at the elegant home of the Korean Ambassador, KIM Il-Soo. About 120 people attended the ceremony including Jewish veterans and their family members, as well as representatives of the 16 states who also sent troops to Korea and friends of the embassy.Over the past few years, the embassy has gone to great efforts to locate the Jewish veterans who participated in the war and this year tracked down more than twenty Jewish soldiers. Veterans that were singled out and awarded were Siman-Tov Giron, Salomon (Shlomo) Sadi, Rudi Meisl and the late Jack Goldman who was represented by his daughter Shoshana Dann. 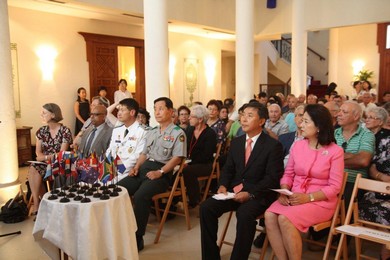 Korean Embassy ceremonyThe ceremony featured the moving personal story of a heroic American veteran, Leonard Wisper. During the war, Wisper’s unit was attacked heavily by enemy troops and he suffered severe injuries. As he bled on the hill, he prayed and vowed to come closer to G-d if he survived the attack. Wisper was taken to a bunker by Chinese soldiers where he was kept captive with three other wounded American soldiers. When a grenade was thrown into the bunker, he had the presence of mind to grab the grenade and throw it outside just before it detonated, thus saving all of their lives. Wisper is now an ultra-orthodox Jew living in Bnei-Brak. He was awarded with a special medal of merit by the US Army as well as a medal from the Korean government 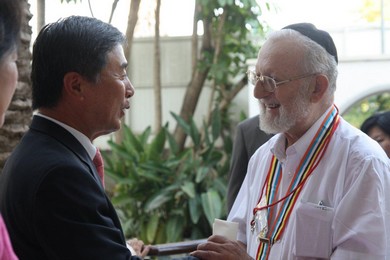 Leonard WisperThe ambassador and military attaché showed huge gratitude to the Jewish soldiers that helped restore and preserve the freedom and democracy of South Korea. In a moving speech, the veterans were referred to as brothers.ITravelJerusalem.com is a new online international travel portal offering all the latest information on things to do, places to eat and places to stay in Jerusalem.
Follow @JPost_Lifestyle