Orthodox Christmas is next

Travelujah explores how Christmas is celebrated among various sectors and the schedule for Feast of Epiphany.

By GEORGE ALEXANDER/TRAVELUJAH
Christmas tree 311
(photo credit: Creative commons)
Advertisement
For further information on Christian tourism and Holy Land Tours to Israel contact Travelujah."Christ is born! Glorify Him!" is the great message delivered among Orthodox Christians worldwide during Christmas, the holiday which brings in the true flavor of the birth of Jesus. The fragrance of the nativity of Jesus Christ is celebrated with much grace in the Orthodox world. 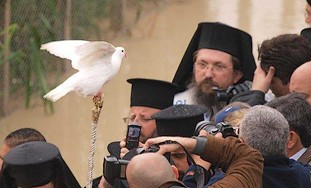 Greek Orthodox Archbishop Theopholis III (Travelujah)Orthodox Christmas is truly the celebration of the great mystery of the Incarnation: The mystery in which God the Word became man in order to redeem human beings; God became one among us and incarnation affirms the importance of both man and the whole of creation.


Orthodox Christianity - fasting Holy fasting is one of the most important parts of the orthodox nativity celebrations. Eastern orthodox Churches fast for 40 days where many of the oriental orthodox churches hold a 25 day fast. The Coptic Orthodox Church observes an additional fast for three days before the beginning of the Nativity Fast, to commemorate the miraculous moving of the mountain of Mukattam (Cairo) at the hands of Saint Simon the Tanner in the year 975, during the rule of the Muslim Fatimid Caliph Al-Muizz Li-Deenillah.The Armenian Church observes fasting one week prior to the nativity celebrations. The Orthodox Church stresses the complete abstinence from non-vegetarian food and other pleasures during fasting periods. Special recipes of food will be cooked and served: Lenten bread and other food such as nuts and fresh dried fruits, vegetables and herbs such as potatoes, peas, garlic, mushroom soup, slow-cooked kidney beans with potatoes, garlic and seasoning, Bobal'ki (small biscuits combined with sauerkraut or poppy seed with honey), bowl of honey and baked cod among others. The type of food and activity may vary depending on the particular country's culture and traditions.For more on Orthodox recipes click here.Dates of Nativity Due to calendar differences, Orthodox Churches celebrate nativity at different dates. Most of the eastern orthodox churches such as the Greek Orthodox, Ethiopian, Russian Orthodox, Coptic and Syrian celebrate Christmas on January 7, 2012 - which is according to the Gregorian calendar, and which day is also known also as Old Christmas Day. This is because 11 days were lost to account for the calendar differences once the Julian calendar was created. The Gregorian calendar predates the Julian calendar which identifies Christmas, as being on December 25, and is celebrated by Latin Catholics. 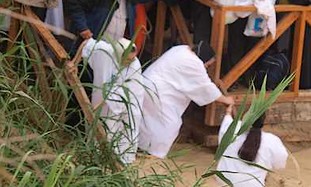 Pilgrims being baptised at the Jordan River during the Feast of Epiphany (Travelujah-Holy Land Tours)The Armenian Christmas is celebrated on January 6, which coincides with Epiphany which represents the feast of the Manifestation of Christ. Its theme is the baptism of Jesus in the Eastern Church. Hence the Armenians celebrate Christmas and Epiphany together on a single day which is called 'Theophany'.In Jerusalem, however, the Armenians celebrate Christmas on January 18 and travel to Qasr El Yahud, the baptismal site on the Jordan River. To learn more on this click here.The Armenian Orthodox will celebrate Christmas on January 18.Several traditions, One Faith Different Orthodox churches have different customs, practices and traditions according to their land of origin, but at the same time all churches are united in one faith. It is the same expression of the undivided church at different places in the world. The practices and traditions observed in orthodox churches definitely have biblical reflections. For example let us consider the case of . Many people relate Christmas tree to pagan tradition. But Orthodoxy has a very different view on Christmas trees. The Christmas tree is derived, not from the pagan yule tree, but from the paradise tree adorned with apples on December 24/January 7 in honor of Adam and Eve. Hence the Orthodox Church considers the Christmas tree completely biblical in origin.At many places Orthodox Christians walk to rivers and seas in procession as part of the nativity liturgy. Holy Christmas songs (canons) are sung from the Holy Day of "Vavedenje" on the December 4, until the January 13, which is the Day of the New Year and is often called Small Christmas.Santa Claus for Western Christians is St. Nicholas for Orthodox Christians. He was also known as ‘Nikolaos of Myra', a historic 4th-century saint and Greek Orthodox Bishop of Myra, now based in modern Turkey.For Orthodox Christians, Christmas is a day for inner thoughts, reflections, repentance and healing.
Travelujah's schedule of Orthodox Christmas and Epiphany events in the Holy Land January 5, Eve of Epiphany 5 a.m. and 7: 30 a.m. at the Manger Grotto for holy masses
11 a.m. at the Tomb of Rachel the Custos of the Holy Land is welcomed by Latin Parish Priest and other representatives of Bethlehem
1:45 p.m. at St. Catherine for Pontifical vespers and procession to the Grotto
3:30 p.m. at St. Catherine for Office of Readings and procession to the Grotto January 6, Epiphany Midnight at the Grotto
Holy Masses till 9 a.m. with an interruption between 1 and 2:30 a.m. approximately
7 a.m. at St. Catherine for holy mass
10 a.m. at St. Catherine for Pontifical mass in Latin and Arabic
3:30 p.m. at St. Catherine for solemn vespers and solemn traditional procession to eh Grotto; Veneration of Jesus with gifts of gold, frankincense and myrrh George Alexander is Travelujah.com's Orthodox Christianity Expert as well as the  Secretary & Spokesperson for the Orthodoxy Cognate Page, Society and Media Network. Visit his blog at www.theorthodoxchurch.infoTravelujah is the leading Christian social network focused on connecting Christians to the Holy Land. People can learn, plan and share their Holy Land tour and travel experiences on Travelujah.
Advertisement
Subscribe for our daily newsletter