Enjoy unsurpassed view of the Central Benjamin Plateau—a wide tableland that spreads north of the hill country of Judea.

By WAYNE STILES
AUGUST 6, 2012 13:01
Aerial from south of Central Benjamin Plateau
(photo credit: BiblePlaces.com)
Advertisement
Wayne Stiles has never recovered from his travels in the Holy Land. Follow him on Twitter (@WayneStiles) or on his blog at www.waynestiles.com.It’s a shame most travelers to Jerusalem neglect to visit Nebi Samwil. For archaeologists, the Hasmonean, Byzantine, and Mamluk ruins surrounding the hill no doubt offer a reason to come. But climbing the staircase of the century-old structure and taking in the panoramic view from its open-air rooftop make that bit more special. The minaret towering above Nebi Samwil looks like a misplaced lighthouse searching for the sea. On a clear day, in fact, a visitor can spy the Mediterranean to the west.Nebi Samwil means the “Prophet Samuel,” referring to his burial place—which it isn’t. Someone in the 6th century tagged the hill as Ramah, the burial place of Israel’s greatest and final judge (1 Samuel 25:1). As a result, Justinian built a monastery here in Samuel’s honor—and the misnomer has stuck ever since. Similar contradictions have attached to David’s Tomb, Rachel’s Tomb, and Joseph’s Tomb. 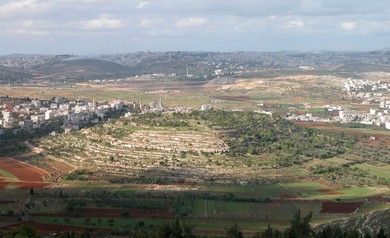 Gibeon from Nebi Samwil (BiblePlaces.com)The hill offers an unsurpassed view of the Central Benjamin Plateau—a wide tableland that spreads north of the hill country of Judea. In antiquity, the terrain above and below this plateau funneled travelers, traders, and warriors across it. Coming from the east or west, the area remained the primary access to Jerusalem. No wonder an estimated half of all narratives in the Hebrew Scriptures occurred here.Everyone associated with Jerusalem wanted to control it. Standing there, history can be seen in every direction: The Mountains of Ephraim to the north and the towers that landmark Baal-hazor (2 Samuel 13:23). To the east, a dip in the watershed ridge marked the area of Ramah, and the skeleton of King Hussein’s half-built palace stood at Gibeah, where King Saul ruled (1 Samuel 15:34). To the southeast, the three towers that stand atop the Mount of Olives. The golden Dome of the Rock peeks over the ridge and gleams from the Temple Mount. 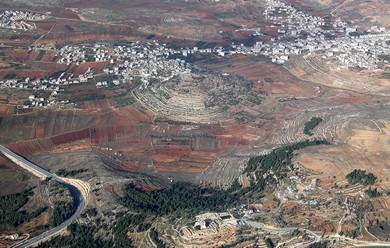 Gibeon and Nebi Samwil aerial from south (BiblePlaces.com)The Crusaders first saw Jerusalem at Nebi Samwil on their march to Jerusalem in July 1099.
But the most prominent site lies right below—Tel Gibeon. Tel Gibeon and wisdom’s truth ignored Tel Gibeon rises with its terraced hills and marks the ancient site where God’s people knew the truth, but chose to ignore it. Nebi Samwil may be what the Bible refers to as “the great high place” at Gibeon (1 Kings 3:4). If so, this is where God appeared to King Solomon at the beginning of his reign:
“In Gibeon the Lord appeared to Solomon in a dream at night; and God said, ‘Ask what you wish Me to give you.’” —1 Kings 3:5 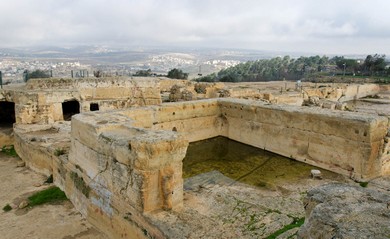 Nebi Samwil excavations (BiblePlaces.com)We all know what Solomon asked for. It’s what we know him for: wisdom.
And yet, while for Solomon wisdom was for the asking, wisdom came with an important caveat from God just a few verses later: “If you walk in My ways, keeping My statutes and commandments, as your father David walked, then I will prolong your days.” —1 Kings 3:14 In other words, wisdom wasn’t enough. It had to be applied to life. The minaret towering above Nebi Samwil stands like some forgotten lighthouse—one not simply displaced but disregarded.  The moral and national shipwrecks that this site represents occurred by ignoring the light that shined from the Hebrew Scriptures.
The history of Nebi Samwil reminds us that wisdom remains useless without its application. Wayne Stiles has never recovered from his travels in the Holy Land. Follow him on Twitter (@WayneStiles) or on his blog at www.waynestiles.com.Follow @JPost_Lifestyle
Advertisement
Subscribe for our daily newsletter