Wandering Jew: Making it out of the ghetto

Jewish history in Warsaw is hard to overlook - Jews were not just part of Polish life, they were Polish life.

By TANYA POWELL-JONES
Jewish residence pre WWII
(photo credit: REUTERS/Katarina Stoltz)
Advertisement
The streets of Warsaw are paved with a poignant Jewish past, waiting to be explored. From the 14th century to the 20th century, from the prayer rooms to the ghetto, Warsaw is a part of history, a part of Jewish history. Modern Warsaw is full of tree-lined streets, trendy kosher cafés and active Yiddish theaters. And with only a day here you might not see everything but you'll leave with something.The Jewish presence in Warsaw can be traced back to the 14th century. Enduring periods of expulsion and re-admittance, the Jewish community of Warsaw eventually flourished. Prior to World War II the Jews accounted for one-third of the city's overall population. Sadly, the events of the war decimated Poland's Jewish population, wiping out over 90 percent of Polish Jewry.Begin a day of sightseeing in the borough of Praga. During the 19th century the Praga area was the center of Jewish life in the city.At 31 Jagiellońska Street a round, masonry synagogue was built by Józef Lessel in 1836. This was the most important meeting place for Jews and was only one of only six circular buildings in the whole of Europe. The synagogue was demolished a few years after the war due to protests over the building's former use as a delousing center by the Nazis. The site was turned into a playground and none of the original structure remains. Nonetheless, this is Warsaw and a certain amount of imagination is needed as many buildings did not survive the War, especially Jewish ones. 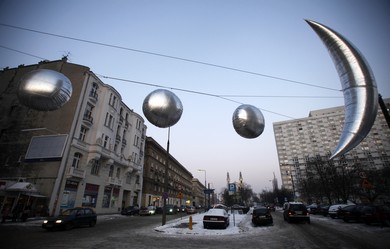 Art installation (Reuters)For centuries many of Warsaw's synagogues were small, private prayer houses. In 1996 one such synagogue was discovered inside a row of houses on 50/52 Targowa Street. Inside two of the houses frescoes depicting signs of the zodiac, Rachel’s Tomb and the Western Wall were found. Currently, the buildings are undergoing renovation, which is scheduled to end in 2012. Once completed, an exhibition space will be housed there. The site can be reached via Stafana Orkzei, a five-minute walk from Jagiellońska.Leaving 50/52 Targowa, it’s hard to miss the Różycki bazaar at number 54. This was once Warsaw's premier bazaar that did a thriving black market trade under Nazi and communist governments. Today, the bazaar is run-down and a bit depressing. Due to the bazaar’s historical importance it could be worth a glimpse but if you're not a fan of polyester and general tack then you probably won't want to stay very long.After spending the morning in Praga, head into central Warsaw for lunch. The Tel Aviv Café & Deli, on Poznańska 11, is right in the heart of the city. This trendy café has a buzzing atmosphere and serves up a range of modern meat-free kosher dishes. They have a daily lunch buffet for 24.99 PLN. A second option is Rambam Kosher Café & Restaurant on 4 Grzybowska Street. Here they serve kosher meat dishes with a seasonal menu. The average cost is 80 PLN per person for a three-course lunch.For the afternoon, a walk around the former Warsaw ghetto and a possible trip to the world's only regular functioning Yiddish theater is a good choice. The former Warsaw ghetto was the largest of all Jewish ghettos in Nazi Europe. Established in 1940 the ghetto housed over 500,000 Jews during the Holocaust. The ghetto has been demolished so the sites on view are only monuments and remnants.A good starting point for a walking tour of the former Jewish ghetto is Ghetto Heroes Square.On April 19, 1943 resistance began by Polish Jews under Nazi occupation against the deportations from Warsaw to the Treblinka concentration camp. Although a brave act, such resistance was to be crushed four weeks later, on May 16. 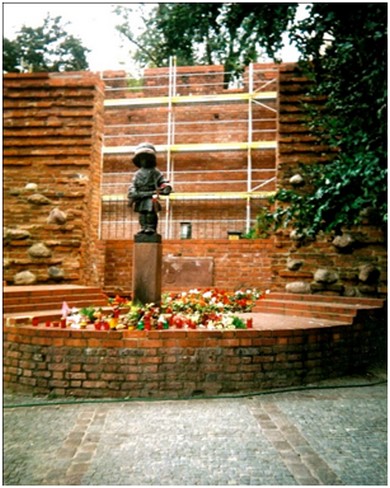 Ghetto Heroes Square (Tanya Powell-Jones)The memorial, erected in 1989, is a brilliant structure, with statues of groups that signify a heroic struggle and tragic loss.The central figure is meant to be Mordechai Anielewicz, who was the leader of the Jewish combat organization during the Warsaw Ghetto Uprising. In his left hand, he is carrying a torch, a symbol of his role in sparking the rebellion against the Nazis.The monument is part of the Path of Remembrance, which is a walk through the former ghetto marked by 16 granite blocks commemorating those who lived and died in the ghetto and the concentration camps. The Bunker Monument that marks the spot where the uprising was coordinated can be found along the path. The walk ends at the Umschlagplatz Monument, which means “taking-away place”. The monument is at the site of the railways siding where so many Jews were transported to Treblinka.In the heart of the ghetto there is a stall that offers a unique reminder of your trip; an official Warsaw Ghetto passport stamp. The stall is located in the main square. 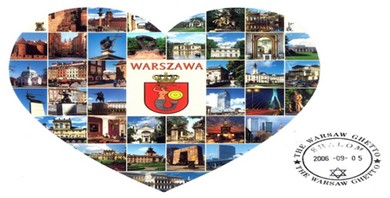 Warsaw Ghetto passport stamp (Courtesy)After a thought-provoking afternoon, head back to the eclectic Poznanska street for a taste of the new modern Warsaw. Here, at number 12, is the Beirut Hummus & Music Bar. They offer outdoor seating and traditional Lebanese snacks and beer. An evening meal is around 105 PLN per person. If you're in town on the weekend it could be worth heading back to the kosher Tel Aviv Café & Restaurant. They too have outdoor seating and on Saturday nights they present a Middle Eastern flavor with music, pillows, and water pipes. An evening meal here is around 100 PLN per person.With food covered there is also the option to visit the only regular functioning Yiddish theater in the world. Most of the actors aren't Jewish but the plays are. Located at Plac Grzybowski 12/16, the theater cultivates the creativity of great Jewish drama. Plays are dependent on the time of year and it’s best to check the website to see what's on when.
The Jewish Virtual Library contributed to this report.
Follow Tanya on Twitter - @TPowellJones
Advertisement
Subscribe for our daily newsletter