A Bush for a Clinton? George H.W. Bush allegedly 'voting for Hillary'

Former US president is reportedly planning to vote against his Republican party's nominee - Donald Trump. 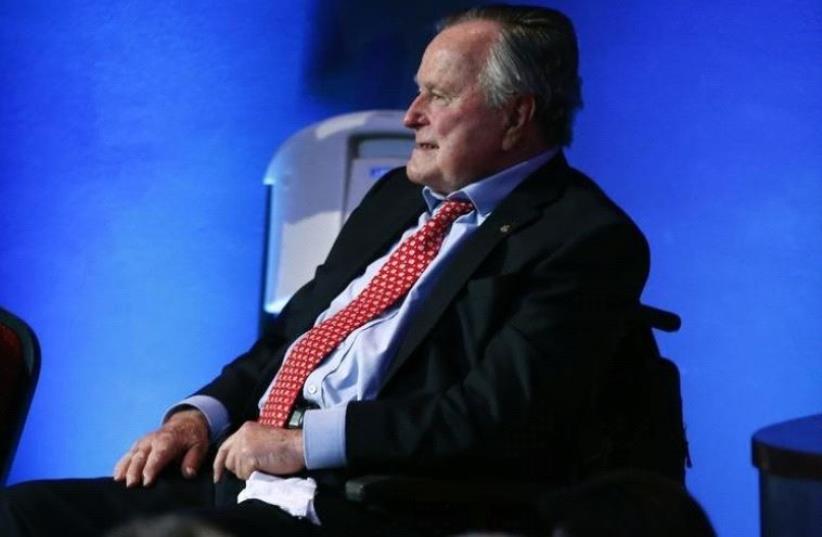 Former US president George H.W. Bush
(photo credit: REUTERS)
Advertisement
Former Republican US president George H.W. Bush is reportedly planning to turn the ballot against the GOP in the November election and vote for Democratic White House contender Hillary Clinton. Bush caused a stir early Tuesday as reports emerged in US media of the 92-year-old apparent decision. While Bush had initially intended to remain silent on his preference in the election, a social media post Monday by Kathleen Kennedy Townsend, daughter of late US senator Robert Kennedy, appear to announce his intentions."The President told me he's voting for Hillary!!" US news outlet Politico reported Townsend as writing in a Facebook post alongside a photograph of herself next to the former president.

Townsend told Politico that Bush had made his preference for Clinton known during a meeting in Maine earlier on Monday.The Facebook account belonging to the niece of John F. Kennedy Jr. appears to be not entirely open to the public. Meanwhile, CNN reported that a spokesman for Bush did not confirm or deny the reports. "The vote President Bush will cast as a private citizen in some 50 days will be just that: a private vote cast in some 50 days," Bush spokesman Jim McGrath told CNN. "He is not commenting on the presidential race in the interim."Bush Sr. and his eldest son, former US president George W. Bush, are among a slew of prominent Republican who have refrained from endorsing their party's nominee, Donald Trump.  Since W. Bush's youngest son, former Florida governor Jeb Bush, dropped out of the presidential race in February, the prominent American political family has largely remained silent on the election.   H.W. Bush served as US president from 1989 to1993, preceding Clinton's husband Bill, who served until 2001 when George W. Bush took over the presidency.