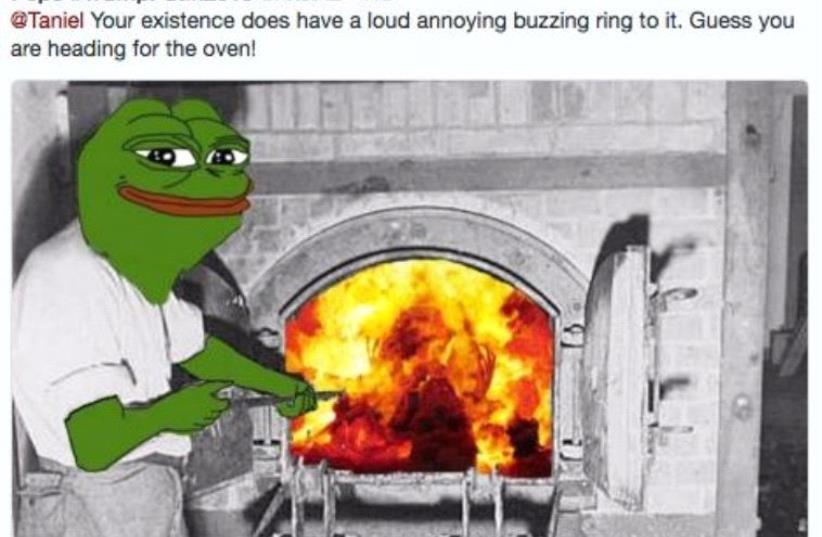 An example of antisemitic incitement on Twitter
(photo credit: TWITTER)
Advertisement
Online antisemitism against journalists has risen over the past year, and has been driven by rhetoric in the 2016 US presidential campaign, according to a report released Wednesday by the Anti-Defamation League Task Force on Harassment and Journalism.ADL launched the task force in June, having become aware of a spate of antisemitic attacks against reporters, particularly online. Task force advisers include outside experts and representatives of journalism, law enforcement, academia, Silicon Valley and NGOs.Using a metric based on a broad set of keywords, the task force identified 2.6 million Tweets containing language frequently found in antisemitic speech, posted between August 2015 and July 2016.ADL noticed a significant uptick of antisemitic Tweets between January 2016 and July 2016, as coverage of the presidential campaigns picked up, with a notable amount of attacks against journalists criticizing Republican presidential candidate Donald Trump.Of 19,254 Tweets targeting 50,000 journalists in the US, two-thirds came from 1,6000 Twitter accounts, many of which are self-identified as Trump supporters, conservatives, or part of the “altright” extremist group, some of whom are white supremacists.ADL stressed that this does not mean the Trump campaign supported or endorsed those Tweets. It did derive from its study, however, that Trump may have helped create an atmosphere that allowed such speech, by his own offensive language against journalists, including the use of words such as “scum” and “disgusting people” to describe them.“The spike in hate we’ve seen online this election cycle is extremely troubling and unlike anything we have seen in modern politics.A half century ago, the KKK burned crosses. Today, extremists are burning up Twitter,” said Jonathan A. Greenblatt, ADL’s CEO. “We are concerned about the impact of this hate on the ability of journalists to do their job and on free speech, which is why we established this task force. We hope this report hastens efforts to combat the surge of hate on social media.”ADL works closely on the issue with both Twitter and Facebook and said Twitter had deactivated 21% of the accounts responsible for the Tweets aimed at journalists.The other offending accounts remain active, and ADL will be providing a list of those accounts to Twitter.While both Jewish and non-Jewish journalists have been targeted, the 10 journalists subjected to the most amount of online abuse are Jewish. These 10 received 83% of 19,253 overtly antisemitic Tweets sent to 800 journalists. They include conservative columnist Ben Shapiro, Tablet’s Yair Rosenberg, the Atlantic’s Jeffrey Goldberg and The New York Times’ Jonathan Weisman and CNN’s Sally Kohn and Jake Tapper.While anonymous trolls were behind a lot of the online harassment, ADL identified white supremacist individuals and websites encouraging such hate speech. The report named Andrew Anglin, founder of the popular white supremacist web site The Daily Stormer and Lee Rogers of Infostormer (formerly “The Daily Slave”). While both are banned from Twitter, ADL found that they have encouraged their followers to Tweet antisemitic language and memes at Jewish journalists.The gathering and analysis of this data will be followed up by a series of recommendations, set to be released November 19.