Peres: Trump's suggestion not to defend allies unless they pay is 'a great mistake'

Speaking to Bloomberg, the veteran Israeli statesman expressed criticism when asked about Republican nominee's remarks that hint at departure from long-held US commitment to NATO allies. 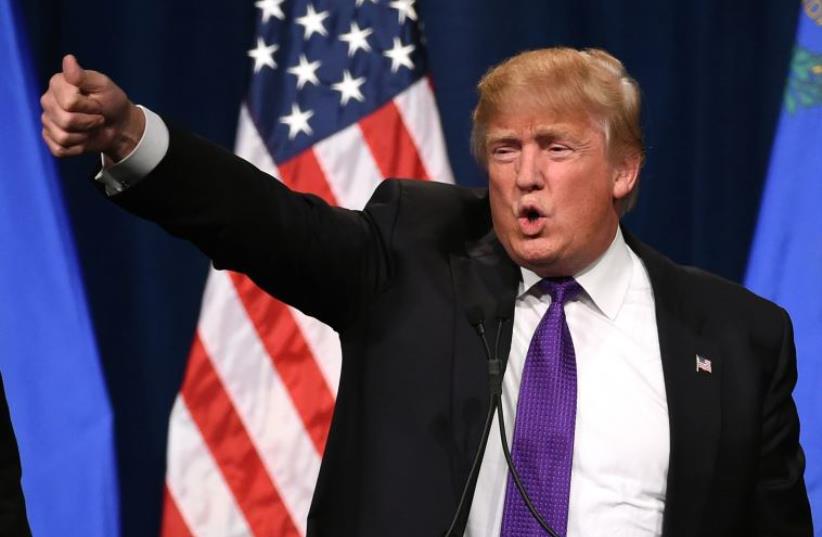 Republican presidential candidate Donald Trump speaks at a caucus night watch party at the Treasure Island Hotel & Casino on February 23, 2016 in Las Vegas, Nevada.
(photo credit: ETHAN MILLER / GETTY IMAGES NORTH AMERICA / AFP)
Advertisement
Republican presidential nominee Donald Trump's recent remarks that raised questions on his commitment to defending the United States' NATO allies if he wins the White House race signals a "very great mistake," former president Shimon Peres said Monday. Speaking to Bloomberg, the veteran Israeli statesman expressed criticism when asked about Trump's proposal to depart from long-held US policy and not provide backing to NATO states who haven't repaid debts to Washington if they are attacked by a foreign entity. “To suggest that America will disconnect her relations with NATO, that America will leave the whole field open to other countries -- in my judgment it’s a mistake,” Peres told Bloomberg ahead of his 93rd birthday.Speaking to the New York Times in mid-July, Trump responded to a question about potential Russian aggression toward the Baltic states saying that if Moscow attacked them, he would decide whether to come to their aid only after reviewing whether those nations "have fulfilled their obligations to us."Trump was quoted as saying he would force allies to shoulder defense costs that the United States has borne for decades, cancel longstanding treaties he views as unfavorable, and redefine what it means to be a partner of the United States.Peres refrained from directly responding to a question about how Israel would view a Trump presidency, saying "we will see after the election."  However, he warned against such a plan that had the potential to isolate the US from members of the 1949 treaty that constitutes a system of collective defense for its 28 adherents. Peres asserted that the United States “was the first superpower in history that did not take, but always gave.”The nonagenarian Nobel Peace Prize laureate advised that the US not stray from this legacy. “Giving is wise: You create friends, and friends are the most profitable enterprise you can have, because to have enemies is very expensive and you waste money and you waste time. What for?” he added. Peres' remarks in the Bloomberg interview came days after Jerusalem unequivocally denied that Israel’s leadership expressed a preference for Donald Trump over Hillary Clinton in the US presidential race.“The Prime Minister expressed no preference whatsoever in this presidential race,” Benjamin Netanyahu’s spokesman David Keyes said Thursday following a suggestion by former New York mayor Rudy Giuliani that that was the case.Reuters and Herb Keinon contributed to this report.