A fourth office is scheduled to be opened in the West Bank, and a fifth may be added later, according to the report. 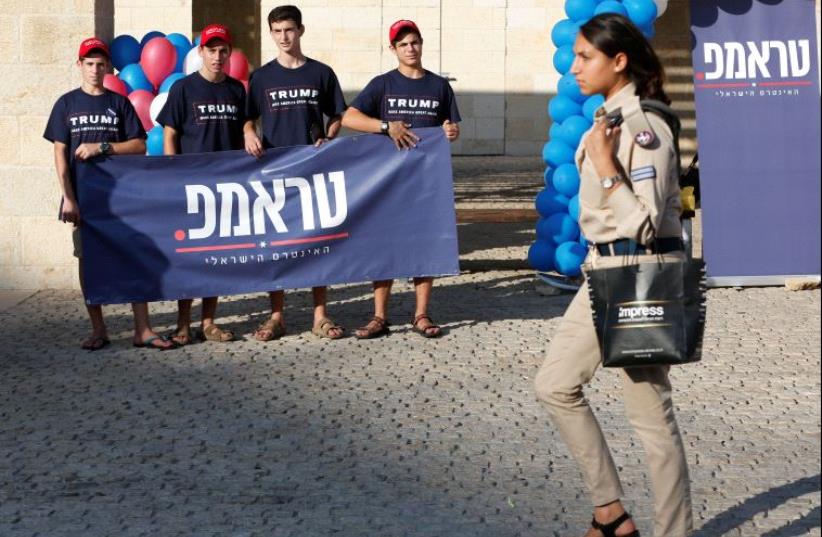 An Israeli soldier walks past members of the US Republican party's election campaign team in Israel, who are holding a banner in support of Republican US presidential nominee Donald Trump, during a campaign aimed at potential American voters living in Israel, near a mall in Modi'in, Israel.
(photo credit: REUTERS)
Advertisement
Republican presidential candidate Donald Trump opened a campaign office near Tel Aviv, his third in Israel.The Ramat Gan office opened Wednesday near the city’s diamond district will serve central Israel, in the Gush Dan and Sharon regions, Israel National News reported Thursday.It joins offices in Jerusalem and Modiin. A fourth office is scheduled to be opened in the West Bank, and a fifth may be added later, according to the report.“Offices are being opened, but more importantly we are getting dozens of inquiries from Americans and Israelis eager to join in the campaign,” Republicans Overseas Israel said late Wednesday in a post on its Facebook page.There are believed to be hundreds of thousands of American Israelis who are eligible to vote in the US election, according to Israeli news reports. Many come from states with a high number of electoral votes or from swing states such as Florida, Ohio, Pennsylvania, New York and California.Republicans hope to draw those voters in an effort to put the swing states in Trump’s column.In 2012, a nonpartisan organization called iVoteIsrael worked to get out the vote among Americans in Israel. The organization was run by a former Republican operative, and an exit poll it conducted that year found that 85 percent of the 80,000 ballots cast in Israel went for Mitt Romney, the Republican candidate.Republican officials this year hope to replicate that effort with an explicitly partisan focus. They estimate that Trump will win the Israel vote by the same margin as Romney did in the last election.A Hebrew-language Trump campaign poster released earlier this month reads “Trump: In Israel’s interest.” The campaign has also launched a Hebrew-language Twitter feed.