The teacher’s husband, Omar, served 10 years in prison for his role in a deadly 1980 bombing in Hebron targeting Jewish settlers returning home from prayers. 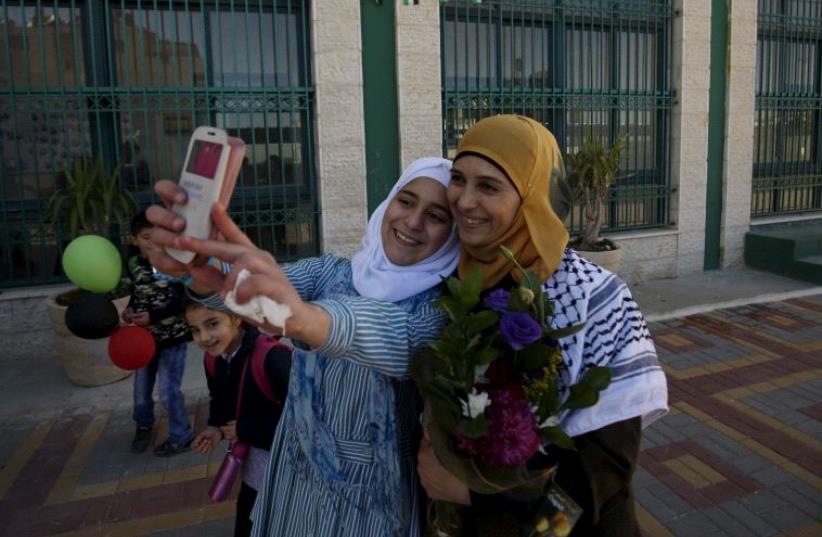 A Palestinian student takes a selfie with teacher Hanan Al Hroub, who is shortlisted to win the Global Teacher Prize, in the West Bank city of Ramallah February 17, 2016.
(photo credit: REUTERS)
Advertisement
WASHINGTON — An appearance by an acclaimed Palestinian teacher, whose husband served time for terrorism, at a Clinton Global Initiative event “disqualifies” Hillary Clinton from the presidency, according to Donald Trump’s campaign.“Today’s report that the Clinton Foundation is feting the wife of a Palestinian man convicted of helping bomb innocent Israeli citizens is deeply disturbing, especially in the wake of this weekend’s attacks,” Jason Miller, a Trump campaign spokesman, said in a statement. “The decision to honor the wife of a terrorist by Hillary Clinton’s foundation shows a complete lack of judgment and a callousness that should disqualify her from holding the presidency.”The emailed release linked to a Wall Street Journal story in which the Republican National Committee also condemned the appearance of Hanan Al-Hroub Tuesday evening at the final meeting of the Clinton Global Initiative.Al-Hroub’s husband, Omar, served 10 years in prison for his role in a deadly 1980 bombing in Hebron targeting Jewish settlers returning home from prayers. Omar Al-Hroub later embraced the Oslo Accords and is a consultant with Palestinian Authority leaders whom Israel recognizes and deals with.Al-Hroub developed techniques to calm children after they witness violence after her own children witnessed Israeli troops shoot and wound their father during the first Palestinian intifada.The techniques reportedly reduce tendencies to violence among Palestinians. In March, she won the Britain-based Varkey Foundation’s $1 million Global Teacher Prize. Among those congratulating her were Pope Francis, Vice President Joe Biden, Microsoft founder Bill Gates and Britain’s Prince William.Haim Saban, the Israeli-American entertainment magnate who is a major donor to Clinton’s campaign and to the Clinton Foundation, and who also is a leading backer of pro-Israel causes, defended the appearance in a statement to The Wall Street Journal.“Hanan al-Hroub is a beacon of hope in a part of the world that is very dear to me and in desperate need of more hope,” the statement said. “I only wish more people honored her and the cause that she embodies.”The Clintons are winding down the Clinton Global Initiative, an arm of their charitable foundation, as accusations have mounted that soliciting donors from overseas governments and magnates presented conflicts of interest when Hillary Clinton was secretary of state from 2009 to 2013.