Trump security guards eventually escorted the man out of the premises of the event in Reno. 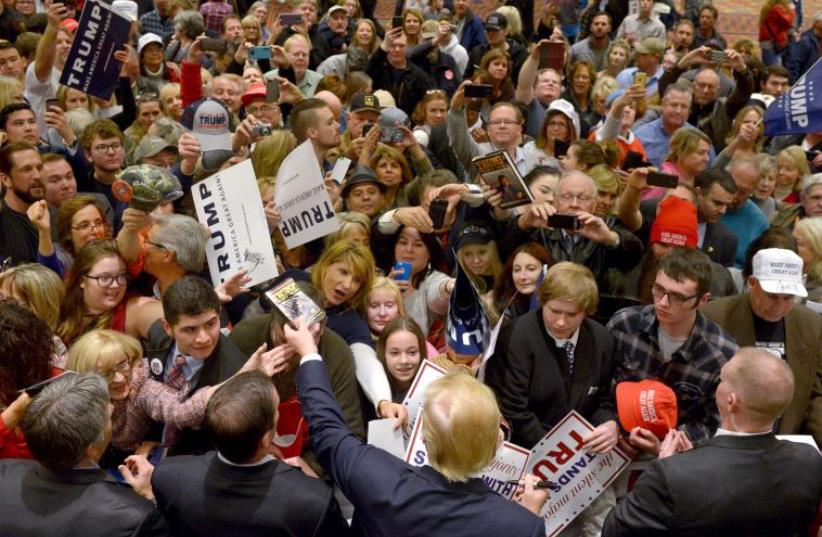 US Republican Presidential candidate Donald Trump signs autographs after speaking at a rally in Reno, Nevada January 10, 2016
(photo credit: REUTERS)
Advertisement
A group of Donald Trump supporters shut down a self-confirmed neo-Nazi at a rally for the Republican presidential nominee in Nevada on Wednesday night, CNN reported. Dozens of people at the campaign event in the city of Reno reportedly circled around the man and attempted to shout him down after he had brandished signs with slogans referring to Holocaust denial, Nazi symbolism and white supremacy. Trump security guards eventually escorted the man, identified as 25-year-old Brady Garrett, out of the premises of the event. Garrett, who said he represented the "alt-Right" movement had brandished posters during the rally reading "Research Holocaust Revisionism" and "1488," a numerical emblem representing white supremacy and the Nazi hail to Hitler. The confrontation between the white supremacy adherent and the Trump supporters ensued after Garrett had made remarks to reporters following the rally. CNN cited Garrett as criticizing Zionism and saying the US needs "to put European Americans first."After making additional disparaging remarks about Trump's policies, and saying that he only back the GOP candidate because he is "anti-establishment" the crowds began yelling and shouting slogans in an attempt to drown out Garrett.Trump's White House campaign has been marked by controversy, particularly regarding remarks the brash real estate mogul has made about Mexican immigrants and his proposal of a ban against Muslims entering the US.
Democratic presidential nominee Hillary Clinton has blamed Trump for the rise of the so-call alt-Right, accusing him of "refusing to condemn" death threats and "anti-Semitic slurs."
Advertisement
Subscribe for our daily newsletter