On Friday, Trump reversed himself and issued a statement saying he would not order the US military to violate international laws to fight terrorism. 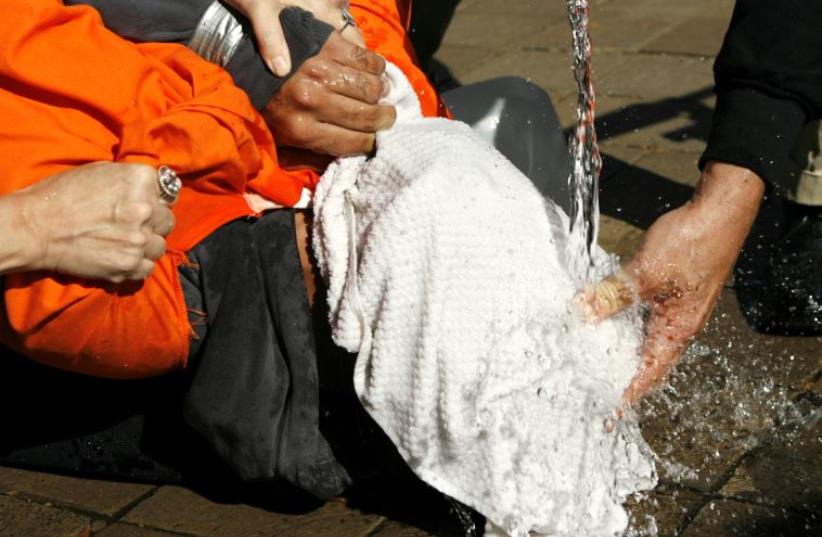 Demonstrator Maboud Ebrahimzadeh is held down during a simulation of waterboarding outside the Justice Department in Washington
(photo credit: REUTERS)
Advertisement
If Donald Trump ordered members of the military to kill terrorists’ families - as he has vowed to do - soldiers who complied could face Nuremberg-like trials for war crimes, a former secretary of defense warned.Trump had as recently as Thursday said he would kill the families of terrorists and torture terrorism suspects if he were elected president, but said Friday he recognized that such actions would violate international law.Speaking on CNN Thursday, William Cohen, who was President Bill Clinton’s last defense chief, said, “The notion that we would attack and kill the families of terrorists is something that contravenes everything the United States stands for in this world of now disorder...there’s something called Nuremberg that we have to be concerned about, that you have an order given by the commander in chief which violates every sense of law and order, international law and order, that would make any of those who carried out that dictum as such to be a violation of the international criminal code.”The Nuremberg trials were a series of military tribunals held by Allied forces in Germany after World War II in which Nazi leaders were prosecuted for war crimes.Later Thursday, during the Republican presidential debate on Fox News, Trump reasserted his support for targeting the families of terrorists and for the use of waterboarding. “We should go for waterboarding and we should go tougher than waterboarding,” he said.On Friday, Trump reversed himself and issued a statement saying he would not order the US military to violate international laws to fight terrorism.“I will use every legal power that I have to stop these terrorist enemies. I do, however, understand that the United States is bound by laws and treaties and I will not order our military or other officials to violate those laws and will seek their advice on such matters,” he said.Cohen, whose father was Jewish, on CNN referenced comments made last week by former CIA and NSA Director Michael Hayden that the military would “refuse to act” on an order given by Trump as commander in chief to kill family members of terrorists.Speaking to Bill Maher on HBO about Trump’s pledge to kill family members of Islamic State terrorists, Hayden said that “if he were to order that once in government, the American armed forces would refuse to act.”“You are required not to follow an unlawful order. That would be in violation of all the international laws of armed conflict,” he said.