Giuliani to 'Post': US is ready to vote for Trump if he doesn’t blow it

The former mayor has been one of Trump’s most stalwart backers among big-name Republicans. 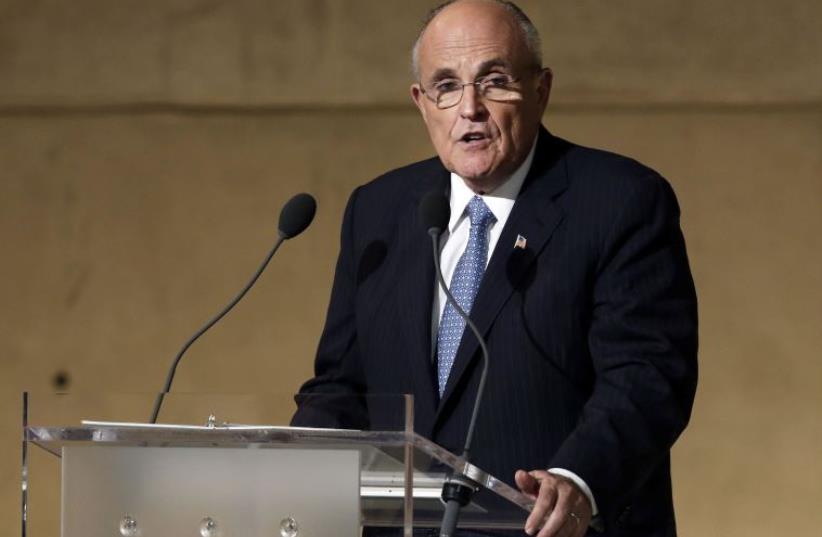 Former New York Mayor Rudolph Giuliani speaks during the dedication ceremony in Foundation Hall of the National September 11 Memorial Museum in New York May 15, 2014.
(photo credit: REUTERS)
Advertisement
The American people are ready to vote for Donald Trump, former New York mayor Rudy Giuliani said Thursday following a two week period during which the Republican nominee has been hammered by his own party, by horrific fund raising reports as well as apocalyptic predictions for Republicans across the US.“The country is ready to vote for him, if he doesn’t blow it,” Giuliani told The Jerusalem Post during a visit to Israel as chair of megafirm Greenberg Traurig’s Cybersecurity, Privacy and Crisis Management Practice.The former mayor has been one of Trump’s most stalwart backers among big-name Republicans, rain or shine (or even downpour) and even laughs at this point about getting used to defending the billionaire after a range of audacious or disastrous (depending on your political stance) statements.How does he defend Trump after this week’s reports that Trump’s war-chest is at just over $1 million and Democratic presidential nominee Hilary Clinton’s is around $42 million?“For sure, she’ll have more money...” he said, “no doubt about it, she will have more paid television ads,” he continued, arguing that she is “a candidate who is bought and paid for by special interests and he is a candidate who can do what is best for the American people because no one owns him.“He will have enough money to get that message out, with combining his own money. He has only spent $20m., he could easily spend another $70m.-$80m. without hurting...the Republican party is raising large amounts of money... the money gap will end up being 2-1, not 42/1,” Giuliani predicted, saying that Trump is unmatched in utilizing free media coverage.Other than the money-gap, does Giuliani see Trump having a fighting chance with a series of daunting predictions against him in recent weeks?“It’ll be a close election by the time we get to November,” he responded, “Personalities can play a big role at this stage, but in October-November, because the issues on which they are running, the American people are equally divided on. It will be about the economy, jobs and whatever else happens in the war on terror.”In a dark prediction, Giuliani added, “we have to assume, I have to assume, based on everything I know, unfortunately, the tragic attack on Orlando is not the last one we will see before the election.”One theme Giuliani continually returned to for shining a rosier light on Trump’s chances was that he had “clobbered” 17 other well-funded and admired Republican candidates by doing things “his way” and that his success spoke for itself.Asked if even Trump has admitted his brash style during the primaries cannot work in a general election by his firing this week of Corey Lewandowski, his campaign manager who managed that unorthodox campaign, he said, “I don’t think so.”Giuliani explained, “I think he has to emphasize issues that are more moderate, but use the same tactics. Go on Joe Scarborough , Chris Mathews, get interviewed by Bill O’Reilly, create big crowds that require newspapers to cover them. His message might get more nuanced for running in a general election, he must also start talking about things independents care about a lot, not just Republicans, but he will use the same style, no notes, speaking off the cuff.”He added, “I don’t expect he will stop creating news,” and with a bit of honest humor “and probably have a few more controversies.”Mainly, he said “firing Lewandowski means they want to put together a more organized, more national campaign in scope.”
With many top Republicans expressing doubts about whether Trump respects the separation of powers after he made veiled and not-so-veiled threats to US House Speaker Paul Ryan about disagreeing with him over policy, Giuliani inverted the issue.He said that many presidents had threatened Congress and disrespected the separation of powers, including US President Barack Obama and that Trump would remain within expected norms but just “sounds different because he is not a politician.”
He also had harsh words for Clinton, saying she was a weak candidate and attacking her credibility for the email scandal in which she held a private email account while US Secretary of State.The account, which in some areas violated government policies for keeping emails on secure government servers, has plagued Clinton generally, but most experts do not predict any legal fallout (though Giuliani said he would have indicted her if he was still a US Attorney.)Greenberg Traurig is the only major international law firm with a multidisciplinary, registered office in Tel Aviv.
Advertisement
Subscribe for our daily newsletter