Analysis: The Clinton emails and the impossible choice

Conventional wisdom when such allegations break right before an election is to pile on the prosecutor, whether in Israel or the US. 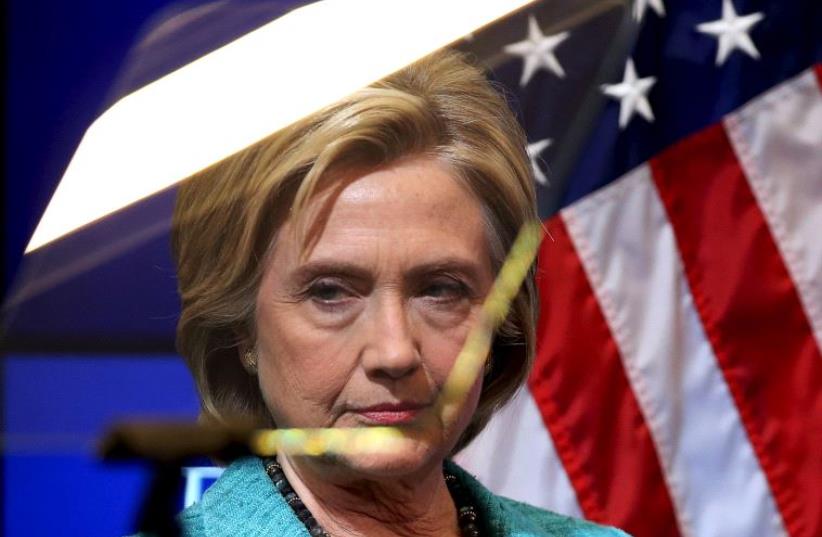 Democratic presidential candidate Hillary Clinton looks through a teleprompter before discussing the Iran nuclear agreement.
(photo credit: REUTERS)
Advertisement
FBI Director James Comey is probably one of the last nonpolitical people in Washington, DC.Republicans criticizing him as partisan until now and Democrats just starting to criticize him as partisan as of his bombshell Friday announcement that he is looking at Hilary Clinton’s emails again, are missing the point and the real question:Assuming prosecutors are nonpartisan, how much should they let the public know about investigations of persons running for office that arise just before an election?
Clinton urges FBI to release more details about new email probe
Why should Comey’s partisanship be beyond reproach? In July, commentators said he may have handed the election to Hilary Clinton by giving her a pass on the email scandal despite characterizing her conduct as “extremely careless.”On Friday, some say he may have handed the election to Donald Trump, by announcing a reopening of the investigation into her emails.Comey earned no political points from either party for either announcement since each was a mixed bag when you read them carefully.Also, anyone who knows Comey’s record would also know that it is highly unlikely he will be putting a ballot in for Trump on November 8. His conduct in high-profile situations resisting former president George W. Bush to defend what he viewed as attacks on the rule of law puts him squarely among moderate Republicans who cringe at Trump’s more callous approach to the legal system and its judges.So given his being nonpartisan, we return to the real question, which has also come up numerous times in Israel and absolutely has two sides.On one hand, Comey explicitly wrote that he does not know if what he has is significant or could lead to Clinton being indicted.This would appear even more true since he exonerated Clinton after a massive investigation into her emails until now.In that light, publicizing anything seems a mistake and seems to impose an unfair burden and cloud on her candidacy.On the other hand, clearly he is bothered by some of the new information that he has been exposed to.As Trump correctly noted, if it was utterly meaningless, Comey would not have said a word.In that vein, having given Clinton a very public pass in July, which would most likely led independents to think that she is clear of any legal troubles, could he now leave that impression with the public without giving an update? What if she is elected and then later indicted and he said nothing (as unlikely as that seems from the announcement so far)? The same issue has risen in Israel.In late 2012, Yisrael Beytenu party leader Avigdor Liberman was indicted right before the 2013 elections.Several candidates for Israeli president, including Silvan Shalom and now deceased Binyamin Ben-Eliezer, had to drop out of the race against President Reuven Rivlin when announcements were made about their possible criminal conduct.Weeks before the 2015 election, State Comptroller Joseph Shapira publicized several reports implying misconduct by Prime Minister Benjamin Netanyahu or his wife, Sara.Each time such allegations are published right before an election, the impacted candidate cries foul.Why not wait until after the election or publicize the allegations months before so that they can be resolved or somewhat clarified by the time Election Day is closing in? Israeli law enforcement officials, from former attorney-general Yehuda Weinstein to Shapira, have made the same comment as Comey: they felt the public had a right to know before making its decision.Conventional wisdom when such allegations break right before an election is to pile on the prosecutor, whether in Israel or the US.If the prosecutors are wrong, a law could always be passed limiting public announcements of investigations right before an election to all but the most serious crimes or to announcements with more definite conclusions than Comey’s announcement, which was about as vague and open to mischaracterization by both sides at they come.That would end the debates over what is customary (many current and former US law enforcement officials argue Comey broke with custom) and whether circumstances are extraordinary enough to ignore custom.There probably is no black-andwhite answer in such situations.But it will likely be a bizarre irony for Comey if he, Mr. Rule of Law, hands the election to the man who a few days ago accused him of rigging the election.