Clinton surrogate and friend: Bernie voters will end up moving to Hillary

On Tuesday, dozens of pro-Sanders delegates and voters stormed the media center of the convention and staged a sit-in with signs saying “Stop her” and “Bernie or Bust”. 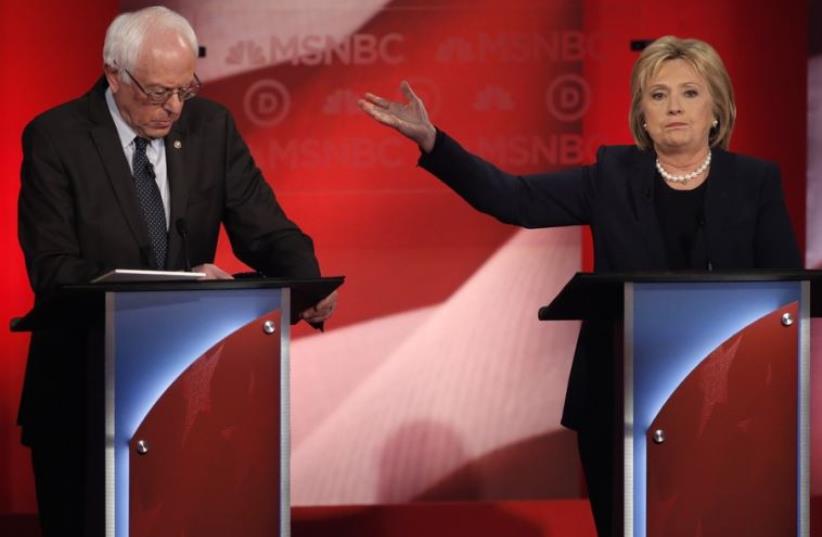 Democratic US presidential candidate and former Secretary of State Hillary Clinton (R) talks about Senator Bernie Sanders (L) during the Democratic presidential candidates debate
(photo credit: REUTERS)
Advertisement
PHILADELPHIA – Most of Bernie Sanders’s disillusioned voters will end up voting for Hillary Clinton in November, Clinton campaign surrogate Ann Lewis told The Jerusalem Post.Lewis, who served as Bill Clinton’s director of communications in the early 1990s, spoke as she was attending the Democratic National Convention this week.Since the four-day convention began on Monday, hundreds of people have protested outside and inside the Wells Fargo Center against the Democratic National Committee, after a chain of emails was leaked last week showing that the party intended to find ways to undermine Bernie Sanders’s campaign and favor Clinton’s, and lied about it.On Tuesday, dozens of Sanders delegates and voters stormed the media center of the convention and staged a sit-in with signs reading “Stop her” and “Bernie or Bust.” Some had covered their mouths with duct tape, to illustrate that they felt the Democratic National Committee had silenced them.According to them, during the states’ roll call vote to secure Clinton’s nomination on Tuesday, they had been ordered to put down their signs and remain silent.“We will keep talking to them, we will keep talking about the issues that people care about,” Lewis said.“There is a small but loud group who are having a hard time letting go.“Half of them will have moved [to Clinton] by the end of this month and others are just gonna be bitter-enders, because for them the emotional charge of being on the highly moral losing side is eventually more important than being politically effective,” she told the Post.Lewis has known the Clintons for more than 20 years.After serving in president Bill Clinton’s administration, she was involved in all of Hillary Clinton’s campaigns from the Senate run to her 2008 bid for the Democratic presidential nomination, in which she was a senior adviser.“What I know about Hillary is how hard she worked. How she is determined to keep trying to make a difference,” Lewis said. “When it came to something she really cared about, she would reach out across the aisle to people, whatever else they might disagree on, and find a way to work together.”“It’s a strategic vision of thinking: How can we get this done? What do we need to do to bring together the people who can make it happen?” she continued.Lewis attended the Democratic National Convention this week in her capacity as a surrogate for the campaign but also as the co-chairwoman of the Jewish American Women for Hillary group.While the 2013 Pew Research Center study on American Jewry showed that 70 percent of American Jews identify themselves as Democrats or leaning Democratic and only 22 percent as Republicans or leaning Republican, a good number of Jews have expressed an interest in voting for Donald Trump, who even received standing ovations during his speech at the American Israel Public Affairs Committee policy conference in March.Addressing these voters, Lewis told the Post that she urges them to vote for Clinton “if [they] want a candidate who is not just committed to a strong US-Israel relationship but also, and as importantly, wants that the United States continue to be a leader in the world.“It’s as a leader in the world that we can provide support to Israel, whether it comes to votes in the UN, or to coalition building [in the region],” she explained. “She is in fact the only candidate who is a strong, committed and knowledgeable supporter of the US-Israel relationship.”According to Lewis, Trump’s foreign policy approach is “dangerous for the United States, and because it’s dangerous for the United States, it’s dangerous for Israel.“We cannot be the partner that Israel deserves if we weaken our own ability to be effective internationally,” she said.An ABC News/Washington Post poll released earlier this month however showed that 58 percent of Americans are dissatisfied with the choice between Clinton and Trump, and see Clinton as “too willing to bend the rules” and untrustworthy.“When Hillary is not a candidate for office, she is the most admired woman in America,” Lewis said. “When she becomes a candidate, her opponents attack her, not on the issues, because that would be hard to do when she is doing what most American people would like, but they attack her personally.”Lewis told the Post Clinton is “in a good place to win.”She added she is not worried about polls taken since last week’s Republican National Convention showing that Trump has taken a lead over the Democratic candidate.“He just had his convention, that’s a high point,” she explained. “As a rule, any year, any candidate, taking a poll in between conventions is not very useful.”