Watch: Clinton stumbles at 9/11 memorial, says she has recovered

Democratic nominee's campaign says Clinton is resting at daughter's apartment and is "feeling much better" after leaving early from 9/11 ceremony in New York. 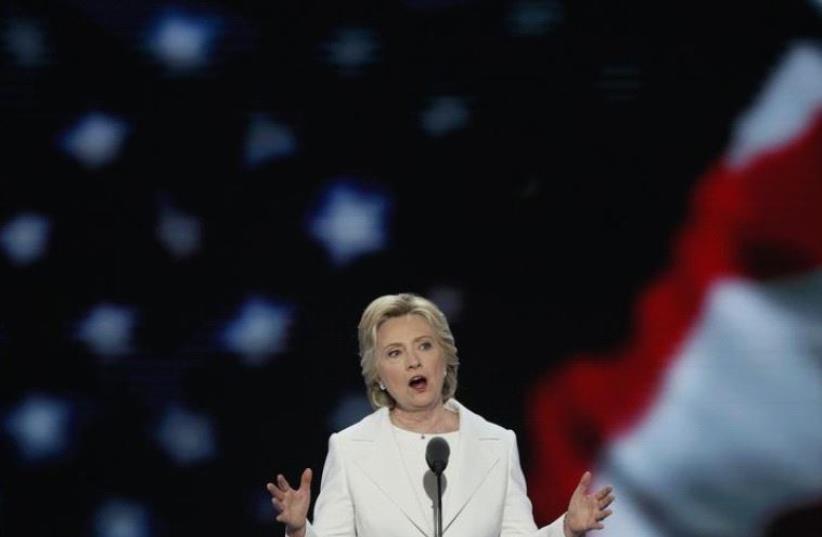 Democratic U.S. presidential nominee Hillary Clinton accepts the nomination on the fourth and final night at the Democratic National Convention in Philadelphia, Pennsylvania, U.S. July 28, 2016.
(photo credit: REUTERS)
Advertisement
Democratic presidential nominee Hillary Clinton felt overheated and left early from a September 11 ceremony in New York City on Sunday, a campaign spokesperson said. The spokesman said Clinton went to daughter Chelsea's apartment in New York and is "feeling much better." Reuters reported that Clinton has made her way to her house in Chappaqua, New York.Fox News initially cited an unnamed law enforcement official as saying that Clinton left the memorial ceremony due to a "medical episode." The source said that the Democratic nominee seemed to faint as she entered her van and was helped by her security convoy. Fox cited a witness who said Clinton stumbled off the curb while her "knees buckled" and also lost a shoe while being helped into the van.

The report was not independently verified, and US media reported that Clinton's aides had not initially responded to questions from the press on the matter. The commemoration ceremony held in New York kept with a tradition that began in 2012 with no public officials set to speak at the ceremony. Both Clinton and Donald Trump attended, among other dignitaries."We'll never forget the horror of September 11, 2001," Clinton said briefly. "Let's honor the lives and tremendous spirit of the victims and responders."Last Monday, Clinton said that she was not distracted by rumors of ill health and that attacks on the Clinton Foundation were not rooted in fact.Opinion polls have recently tightened between Clinton, the former secretary of state and US senator, and Trump, a New York businessman, ahead of the November 8 election.Reuters contributed to this article.