Clinton has called for the establishment of a no-fly zone and "safe zones" on the ground in Syria to protect non-combatants. 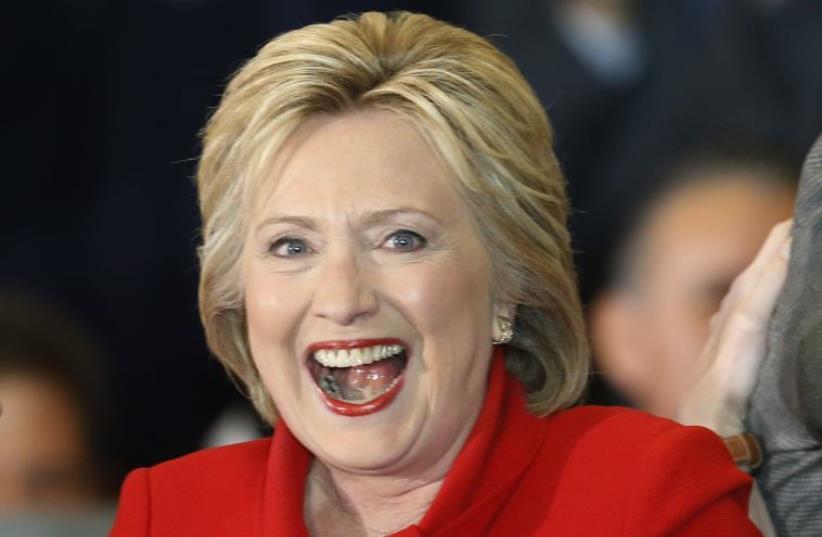 Democratic US presidential candidate Hillary Clinton celebrates at her caucus night rally in Des Moines, Iowa February 1, 2016.
(photo credit: REUTERS)
Advertisement
GENEVA - Syria's political opposition hopes Hillary Clinton wins the US presidential election next week because she has a better understanding of the conflict than Donald Trump, according to members of a delegation holding talks at the United Nations.Khaled Khoja and Hind Kabawat, in Geneva on Monday to press for UN-led negotiations on the release of Syrian detainees, said they trusted Clinton, a former US Secretary of State, to deliver on the opposition's top priority - protecting civilians.Clinton has called for the establishment of a no-fly zone and "safe zones" on the ground in Syria to protect non-combatants. Trump says this could "lead to World War Three" due to the potential for conflict with Russia, which is providing military support to President Bashar al-Assad.Kabawat said Trump, who has never held public office and has no foreign policy experience, saw Islamic State, also known as ISIS, as the only alternative to Assad in Syria."For us a woman's leadership at this time would be a good thing. Also for many, like Trump and others, they think that the Syrian conflict is comparing Assad with ISIS and they have to take one side or the other, and of course for them Assad will look more prominent than ISIS," said Kabawat."She (Clinton) knows that is wrong. She knows that there is this moderate opposition that believes in democracy and freedom. This is what we are aiming for, to have a president of the U.S. with good experience who knows the difference between the different oppositions."Assad, whose forces have regained much territory against their opponents with the help of Russian warplanes, has branded all those opposed to his rule as "terrorists".ISLAMIC STATETrump has said defeating Islamic State should be a higher priority than trying to persuade Assad to step aside, a departure from a long-held US policy objective.Khoja, leading the Syrian opposition delegation in Geneva, disagreed with this viewpoint."Dealing with only the ISIS issue will not help with solving the crisis in Syria or the region because the root cause of the crisis is the (Assad) regime itself," he said.Kabawat, an attorney and a member of the opposition High Negotiations Committee, added that the Syrian political opposition wanted to see women playing an equal role to men in the nation's politics.The opposition delegation, which has links to the Free Syrian Army but not with Islamic State or al Qaeda-linked groups, is in Geneva this week to revive the issue of prisoner releases, sidelined during months of fruitless peace talks.Khoja said more than 100 armed groups had shown their willingness to cooperate but there had been no sign of cooperation from Assad's government or Russia, adding that the United Nations should form a committee on the matter."If it's needed, if there is a response from the regime side to release the detainees and stop killings inside Syria, then we can have the representative of the military groups also in this committee, and if the regime wants to send someone to this committee, we can discuss it," Khoja said.The Syrian Network of Human Rights has documented more than 90,000 detainees held by the Syrian government, 6,000 held by Islamic State and 2,400 held by the rest of the opposition, but estimates the real numbers are twice as high.