Iowa Jewish leader says Israel important to state’s Jews, but not only issue 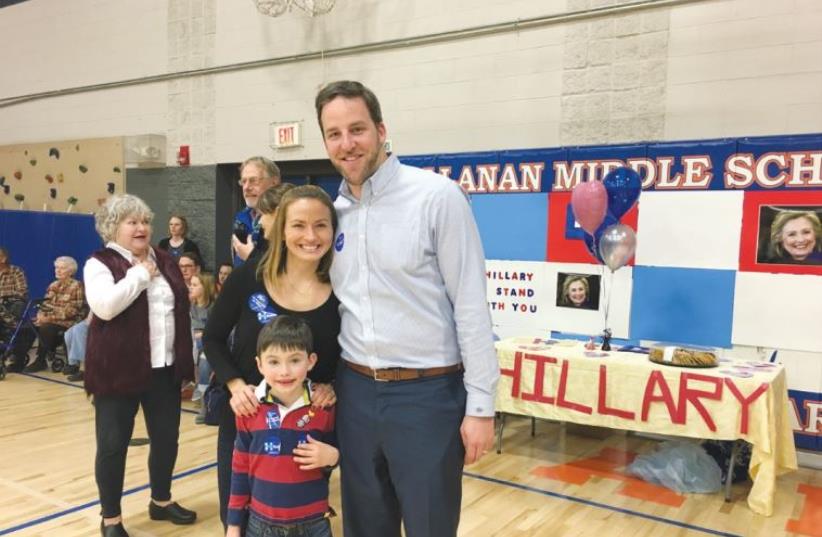 DAVID ADELMAN, president of the Jewish Federation of Greater Des Moines and chairman of AIPAC in Iowa, stands with his wife and son at a Democratic caucus in Des Moines Monday
(photo credit: DANIELLE ZIRI)
Advertisement
DES MOINES, Iowa – The Jewish community of Iowa holds Israel as an important voting component but it is not the absolute, Jewish Federation of Greater Des Moines president and AIPAC chairman in Iowa, David Adelman told The Jerusalem Post on caucus day.“I would say the Jewish community in Des Moines is representative of a cross section of the Jewish community nationally,” he explained on Monday. “There are probably more Democrats than Republicans in the Jewish community here. They are focused on social justice issues and so they are attracted more to the Democratic themes of the campaign.”Adelman told the Post that there is “a balance” in the issues Jews in Iowa consider when it comes to of Israel.“We support issues of human dignity and refugees and the idea of tikkun olam [repairing the world], but we obviously are very sensitive to the fact that people treat Israel as a double standard.”However, Democratic Jews, he explained, have been disappointed that foreign policy was hardly ever discussed in debates between the candidates.Ahead of the caucuses, the federation has organized a presidential speakers series and hosted several of the candidates over the past months, giving them a chance to address questions from the Iowan Jewish community.The latest one to participate in the series was Hillary Clinton, who held a Q&A session at the federation last Monday.“I think she did a phenomenal job convincing the Jewish community here with her strength on diplomacy and her understanding of Israel.She did a fantastic job in swaying those who supported Bernie [Sanders] on ideals.“Her entire focus was on three topics: Peace with the Palestinians stating her support for the two-state solution; the Iranian deal and how to implement it and keep it moving forward; and lastly BDS [Boycott, Divestment and Sanctions movement] and how there is a difference between criticizing an administration and exercising your right to free speech and demonizing a country,” Adelman explained.On the Republican side, he said, Iowan Jews tend to prefer the establishment candidates such as Marco Rubio, Chris Christie, Jeb Bush and John Kasich. Republican Jews in Iowa, according to him, have been disturbed by some of the points made by Donald Trump and Ted Cruz.Although there are differences in beliefs within the Iowan Jewish community, Adelman explains one thing is very clear: They are very active in the voting process.“Iowa voters in general are highly intelligent voters. I would say the Iowa Jewish voter is even more participatory in the process,” he told the Post. “There are only about 140,000 people participating in the caucuses and so the way the caucus system is set up, 15 or 25 Jews in a caucus can sway the delegate camp.”The Des Moines area’s Jewish community is only made up of about 3,000 people in a general population of some 500,000 residents.“We are small, but mighty,” Adelman noted.Some immigrated after the Holocaust, some in the early 1900s, and in the 1980s, a large number of Russian Jews also came to Des Moines after the fall of the Soviet Union.“Most Jews in the past here in the Des Moines were entrepreneurs,” he said. “They were small business owners, inventors.”“In the ’80s, there was large influx of Jewish professionals: attorneys, physicians, executives,” he continued.“In the 1990s and early 2000, those Jews who owned small businesses sold or retired and their kids left to the coasts.”However, he said, Jewish life is thriving in the city today, as more first-generation Iowans choose to live in the Hawkeye State to enjoy a better quality of life.“Now it’s a choice to be here and it’s not just adults who’s parents are here but a cross section of people all over the country,” he explained.