Israel, national security on the minds of South Carolina voters

The state’s open-primary allows residents to vote in either the Republican or Democratic races, which creates an interesting dynamic. 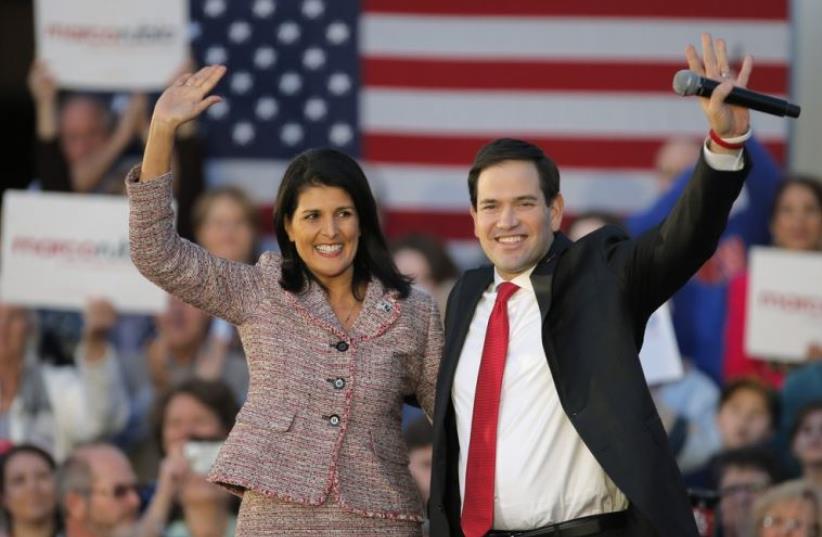 South Carolina Governor Nikki Haley and Marco Rubio react on stage during a campaign event in Chapin
(photo credit: REUTERS)
Advertisement
CHARLESTON – All eyes are on the winner-takes-all state of South Carolina as Republicans and Democrats head to the polls on February 20 and February 27, respectively.The state’s open-primary allows residents to vote in either the Republican or Democratic races, which creates an interesting dynamic and could have major implications for the overall results of the primaries.Some Republicans who are strongly against former secretary of state Hillary Clinton said they plan to vote in the Democratic primary, to express their disdain and so they can vote for Vermont Sen. Bernie Sanders, who is perceived as the less electable of the two.By the same token, some Democrats here have expressed support for Donald Trump as the Republican presidential candidate and they might vote for him in the Republican primary.This could be a crucial primary for Trump, the current GOP front-runner, who is at 36 percent, with rivals Cruz and Rubio at 17% and 15%, respectively, according to a Bloomberg primary poll from earlier this week. Considering Trump’s high negative rating among much of the other 64% of Republicans, once candidates drop out and the so-called “establishment lane” consolidates, Trump is at risk of losing his front-runner status. Hence, some of his focus in South Carolina has been to court Democratic voters (for example in criticizing President Bush for the Iraq war).Meanwhile, issues of national security and the role of government are at the forefront for South Carolina voters.Jerry Dunleavy, a volunteer for Ted Cruz’s Greenville call-center, talks to dozens of voters everyday.“Whether we call upstate or down-state, people in South Carolina are concerned about the same things: The Second Amendment, the Constitution, religious liberty and national security,” he said.Dunleavy, who quit his job to join the Cruz campaign, points to a natural security issue on voters’ mind. “Israel comes up in a lot of conversations with voters. People are concerned about the way Israel was treated in the last seven years. Voters are also very concerned about Iran.”Such dynamics came to bear in a Cruz rally in Aiken on Monday morning which attracted hundreds of voters, some driving more than an hour in this rural part of the state near the Georgia border.Cruz opened his speech describing the five things he would do in his first day in office. “The fifth thing I intend to do, is begin the process of moving the American Embassy in Israel to Jerusalem, the once and eternal capital of Israel,” he said to loud and long cheers by the crowd.Barbara Tawzer, a resident of Lexington, South Carolina, explained during the Cruz rally that “God blesses those who stand with Israel. It is a very important factor for me in choosing a candidate.”At a Jeb Bush rally in North Charleston, Joseph Robinson of Charleston offered a different angle on supporting Israel."We are too involved overseas," he said. "We need to scale back our involvement and rely on our global cooperations. Israel is our strong ally in a part of the world in which we do not have many real allies."Down the coast, in a rally in Mount Pleasant, Marco Rubio accused President Barack Obama of betraying Israel and a declaration that “Israel is our strongest ally” resulted in cheers across the venue.Echoing the overarching sentiment among GOP voters when it comes to Israel, Republican voter Patty Budd said, “God has an everlasting covenant with Israel. Those who support Israel are part of the covenant. The United States must be pro-Israel.”Budd, whose husband served in the US Air Force for 24 years, said her support of Israel is intertwined with her support of the military.“My family gave a good chunk of our life to serve our country. We need a presidential candidate that supports the men and women in active duty that are now behind us,” she said.As the candidates’ campaign buses coming to a halt this Saturday, GOP voters of South Carolina deliver their verdict.