“She came in and had to get it right, and had, I think, basically one shot. A lot of lives were saved,” ambassador Ron Dermer said. 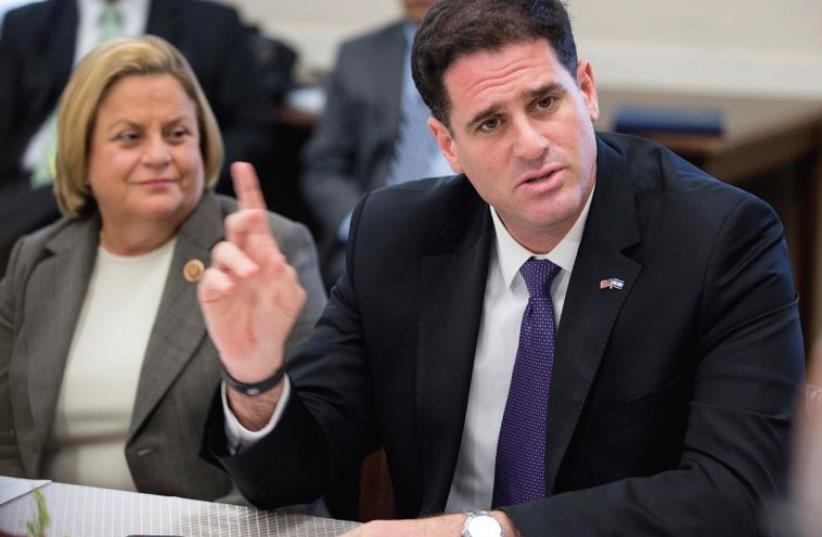 Israeli ambassador to the United States Ron Dermer speaks to members of Congress in 2014
(photo credit: REUTERS)
Advertisement
PHILADELPHIA — Ron Dermer, the Israeli ambassador of the United States, credited Hillary Clinton with the leading role in achieving a cease-fire in Israel’s 2012 conflict with Hamas.Clinton flew to the region and conducted shuttle diplomacy between Egypt and Israel to end hostilities between Israel and Hamas through indirect negotiations. Dermer said that because of the quick cease-fire, the eight-day conflict was the only one of Israel’s three rounds of fighting with Hamas to not include an Israeli ground operation in Gaza.“She came in and had to get it right, and had, I think, basically one shot,” Dermer said at an event hosted by the S. Daniel Abraham Center for Middle East Peace at the Democratic National Convention in Philadelphia. “A lot of lives were saved.”Dermer said the talks defined “how the US and Israel work together as allies.”He also defended Israeli settlement expansion in areas that would likely be part of a Palestinian state in a negotiated agreement. Dermer admonished the international community for criticizing Israeli building in settlements that would likely remain part of Israel. And he said that settlers living deeper in the West Bank should, in the event of Palestinian statehood, be given the option of gaining citizenship in that state.“When you think settlers are undermining the prospects of peace, you are saying Palestine must be ‘judenrein,'” he said, using a Nazi German term meaning “free of Jews.” “There is no reason, concretely and in principle, why Jews should not be able to live in a future Palestinian state.”Early in the event, a protester disrupted Dermer, standing in front of him, holding a banner and yelling “Occupation is not a Jewish value. Settlements are an obstacle to peace. We need justice and peace. We need equality for all people in Palestine and Israel.” After security guards escorted her out, protesters outside chanted “Free, free Palestine.”Dermer said the next U.S. president should pursue the peace process by engaging with the Palestinian Authority and the wider Arab world on parallel tracks. As Israeli Prime Minister Benjamin Netanyahu has suggested, Dermer said shared opposition to Iran and the Islamic State terror group could draw Israel and Arab states closer together.“The Arab states in the region understand the dangers of Iran, understand the danger of ISIS, and see Israel as a potential ally in that struggle,” he said. “One of the opportunities for a new administration is to take this new realignment in the Arab world and see how to translate that into a policy that advances peace.”