Trump sparked outrage in Mexico with his campaign vow to build a wall along the southern US border to keep out illegal immigrants and drugs, and to make Mexico pay for the construction. 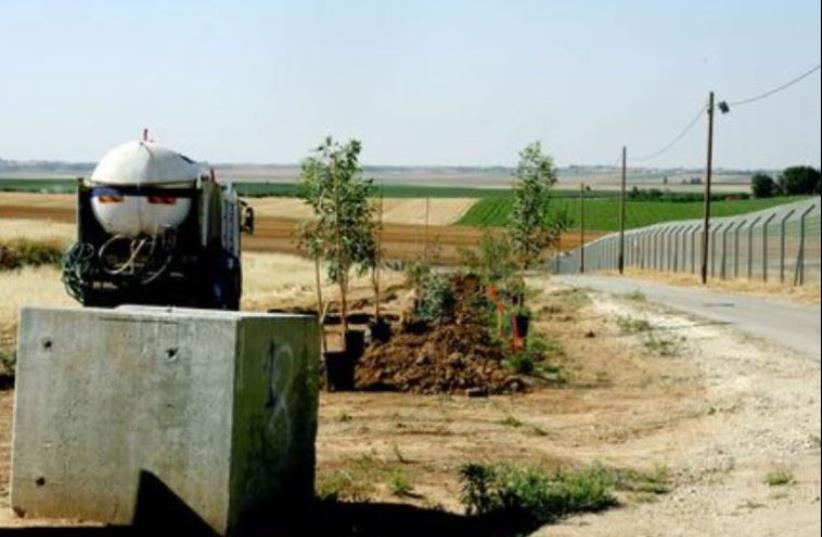 Trees planted along the Gaza security fence‏
(photo credit: AG/KKL ARCHIVE)
Advertisement
An Israeli company credited with building the defense barrier that crowns the Gaza Strip has signaled its interest in helping construct a controversial border wall proposed by US Republican presidential nominee Donald Trump, according to a report published by Bloomberg News on Tuesday.Saar Koursh, owner of Magal Security Systems Ltd., told Bloomberg in an interview last month that his expertise in constructing security barriers in Israel and across the globe could help bring the candidate’s proposal into reality.“We would join forces with a major US defense company that has experience with such projects worldwide,” said Koursh, who spoke to Bloomberg while accompanying Prime Minister Benjamin Netanyahu to Africa on a diplomatic mission in early July. “We’ve done it in the past, and we would definitely want to do it.”In June 2015, Trump sparked outrage in Mexico with his campaign vow to build a wall along the southern US border to keep out illegal immigrants and drugs, and to make Mexico pay for the construction. He also accused Mexico of sending rapists and drug runners across the border, and vowed to increase fees on some Mexican visas and all border crossing cards to help make Mexico pay for the proposed wall.Magal specializes in engineering “smart fences” which are constructed with video cameras, ground sensors and motion detector monitoring.The company has helped construct security barriers along the Egyptian and Jordanian borders, and has contracts to do the same in Kenya, Somalia and other African countries under threat from violent organizations.Koursh added that a number of factors have contributed to a rising demand for his hi-tech security barriers, including mounting jihadi extremism and increased migration.“The border business was down, but then came ISIS and the Syrian conflict. The world is changing, and borders are coming back big time,” Koursh said.JTA contributed to this article.