US citizens in Israel continue to voice concerns about ballot requests not being received, not long before election. 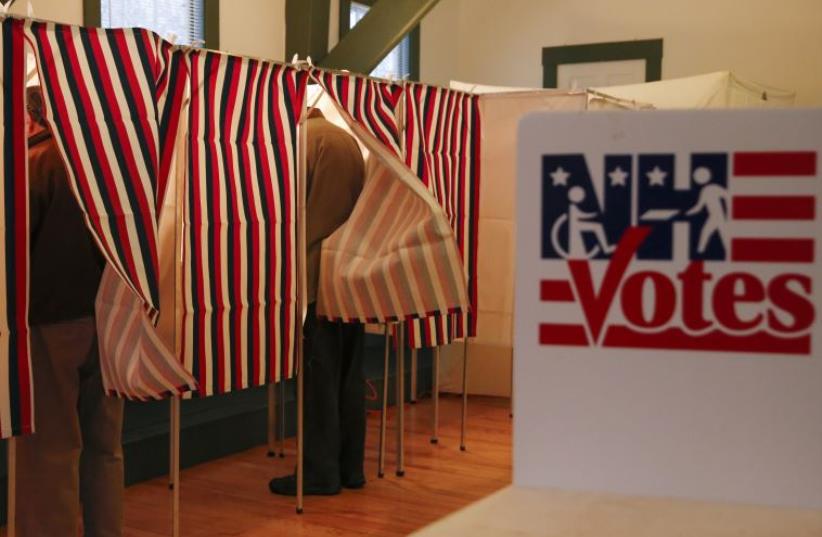 People vote at a polling place at the Canterbury Town Hall polling station in Canterbury, New Hampshire February 9, 2016
(photo credit: REUTERS)
Advertisement
Absentee voters in the US election who yet to receive ballots still have options if they want to vote, iVoteIsrael National Director Eitan Charnoff said Thursday.“The answer is a write-in ballot,” Charnoff said, encouraging people who are concerned about not receiving a ballot to print out and mail the Federal Write-in Absentee Ballot (FWAB), available online.All states accept the FWAB, and according to Charnoff, 22 states will accept the FWAB as a voter registration form. The rules as to whether a ballot request had to be received for a FWAB to be accepted vary from state to state and can be found on the Federal Voter Assistance Program website and in other places online, or by contacting your local election board.The deadline for absentee ballots to be received in the US also varies by state. Most will accept the ballots by mail until Election Day, November 8.Charnoff said the most common complaint iVoteIsrael hears is from people who are concerned that they have yet to receive a ballot, but that there are far fewer such complaints this year than in 2012.The comments came as US citizens in Israel continued to voice concerns about their ballot requests not being received by their local election boards, following a Jerusalem Post report on several US voters who gave their requests to iVoteIsrael, but found they had not been processed yet. Some of the voters accused iVoteIsrael of not handling their ballot requests properly, which the organization denied.iVoteIsrael mailed its ballot requests via the US Embassy in Israel, which did not respond to a request for comment by press time.“This is normal,” Charnoff said. “Sometimes we receive ballots in the last days of October and even into November, and that’s OK."A ballot may not arrive at all if a ballot request was not legible or not filled out properly, he explained. The local board may throw out the request, and in rare cases, they may call voters to clarify something. Another option is that the election board has not received the ballot request yet, in which case the ballot would arrive closer to Election Day.Some voters, however, were not reassured. As recently as Thursday, The Jerusalem Post continued to receive complaints from voters who had read the article, and similar questions appeared on the iVoteIsrael Facebook page. Some accused iVoteIsrael of throwing out ballot requests coming from members of a particular political party, though The Jerusalem Post found that both Democrats and Republicans from a variety of states have not received ballots.Joshua Wander, an Israeli who made Aliya from Pennsylvania, wrote to the office of Senator Pat Toomey (R-PA) to complain.“We submitted our applications for ballots through a service called iVoteIsrael, which in turn claims to have passed on all of the applications directly to the US Embassy in Tel Aviv. Many of these applications, including those of my family, never made it to their local election authorities,” Wander wrote. “I believe this may constitute election tampering and should be investigated, especially if it involves our local embassy.”Toomey’s staff wrote back to Wander that they will “certainly make inquiries in the matter.”