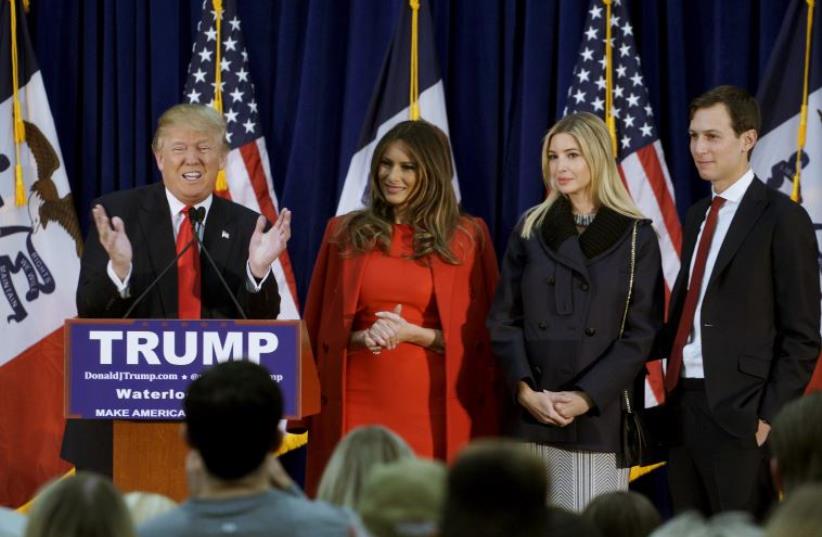 US Republican presidential candidate Donald Trump speaks as (L-R) his wife Melania, daughter Ivanka and Ivanka's husband Jared Kushner listen
(photo credit: REUTERS)
Advertisement
Donald Trump’s Jewish son-in-law has been called out by a writer for the New York Observer, a newspaper he owns, for allowing perceived anti-Semitic messaging to be used in his father-in-law’s presidential campaign.Observer entertainment writer Dana Schwartz published “An Open Letter to Jared Kushner, From One of Your Jewish Employees” on the paper’s website on Tuesday.Schwartz’s piece was a response to a tweet from Trump’s official Twitter account on Saturday that juxtaposed a picture of Hillary Clinton with a six-pointed star reminiscent of a Star of David over a background of dollar bills. Trump deleted the image, but many found the image to be the latest in a series of messages from his campaign with anti-Semitic undertones.The presumptive Republican presidential nominee said that the image was a “Sheriff’s Star” and that the media was “dishonest” for trying to portray it as a Star of David, although a millennial news site found that the image had been created for and previously shared on anti-Semitic internet message boards.“You went to Harvard, and hold two graduate degrees,” Schwartz wrote to Kushner, who is a top campaign adviser to Trump, his wife Ivanka’s father. “Please do not condescend to me and pretend you don’t understand the imagery of a six-sided star when juxtaposed with money and accusations of financial dishonesty. I’m asking you, not as a ‘gotcha’ journalist or as a liberal but as a human being: how do you allow this? Because, Mr. Kushner, you are allowing this.”The New York Times reported Tuesday that Kushner, a 35-year-old real estate developer, “has become involved in virtually every facet of the Trump presidential operation, so much so that many inside and out of it increasingly see him as a de facto campaign manager.”The Times found that Kushner helped Trump recruit a communications director, oversaw the creation of an online fundraising system and is helping him choose a running mate. He reportedly convinced Trump to fire his former embattled campaign manager Corey Lewandowski.Kushner, who is Orthodox, also advises Trump on issues involving Israel and worked on a draft of Trump’s speech to the American Israel Public Affairs Committee in March.The Trump campaign has been criticized for ignoring anti-Semitic attacks on journalists who have written critically of the candidate. Schwartz wrote that when she called out what she saw as the “blatant anti-Semitic imagery” of Trump’s tweet, she was hit with dozens of anti-Semitic tweets in response.“Right now, this hate is directed to one of your employees, but the message applies equally to your wife and daughter,” Schwartz wrote. Ivanka Trump underwent an Orthodox conversion before marrying Kushner in 2009.“When you stand silent and smiling in the background, his Jewish son-in-law, you’re giving his most hateful supporters tacit approval,” wrote Schwartz.According to the Times, Kushner believes Trump’s “respect for his Jewish faith is sincere” and that the issue is “not worth addressing.”Criticism of Trump’s “Sheriff’s Star” tweet stayed steady on Tuesday. House Speaker Paul Ryan (R-Wis.) said the original tweet contained “anti-Semitic images.”“Look, anti-Semitic images, they’ve got no place in a presidential campaign. Candidates should know that,” Ryan said on the Milwaukee radio station WTMJ on Tuesday. “The tweet’s been deleted. I don’t know what flunky put this up there. They’ve obviously got to fix that.”