Clinton, meanwhile, suggested support for a robust defense package during a speech in March to the American Israel Public Affairs Committee. 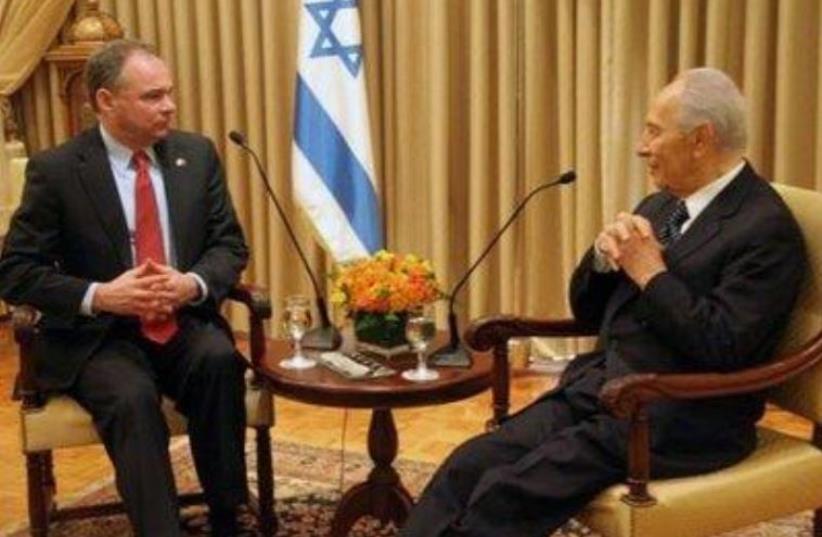 Virginia Senator Tim Kaine with former Israel president Shimon Peres
(photo credit: JCRC OF GREATER WASHINGTON (DC))
Advertisement
Presumptive Democratic vice presidential candidate Tim Kaine was one of only 17 senators in April not to sign a letter urging US President Barack Obama to increase the US military aid package to Israel.The bipartisan letter, sponsored by Chris Coons (D-Delaware) and Lindsey Graham (R-South Carolina), urged Obama to conclude a “robust” new military aid package “that increases aid to Israel and retains the current terms of the existing aid program.”Eighty three senators signed it, but 13 Democrats, three Republicans and one Independent did not.Among those who joined with Kaine in not signing were Vermont senator and Hillary Clinton’s challenger for the nomination, Bernie Sanders; Democratic Senator Barbara Boxer (California); and Republican Jeff Sessions (Alabama), the first senator to endorse Donald Trump and the person who formally nominated him at the Republican convention last week in Cleveland.Clinton, meanwhile, suggested support for a robust defense package during a speech in March to the American Israel Public Affairs Committee.She recommitted herself to maintaining Israel’s qualitative military edge in the region, and called for a renewed defense package “as soon as possible.” Israel, she said, should receive “the most sophisticated defense technology” available.Israel and the US have for months been negotiating the terms of a new Memorandum of Understanding (MoU) to govern US military aid for the next decade to replace the existing one that expires in October 2017. The final sum is expected to be in the range of $38 billion over 10 years, including supplemental funding for missile defense.If, indeed, $38 billion is the final amount, it would constitute about a $4 billion increase in the $34 billion in military aid Israel received over the past decade, which includes $30 billion under the MoU, and another nearly $4 billion from 2007-2017 in supplemental missile defense aid.However, under the terms of the new MoU, Israel’s ability to transfer some 26 percent of those funds into shekels for use in Israel is expected to be gradually done away with, and all the funds – except for a few exceptions – will likely need to be spent in the US by the end of the next 10-year period.The letter to Obama stated, “In light of Israel’s dramatically rising defense challenges, we stand ready to support a substantially enhanced new long-term agreement to help provide Israel the resources it requires to defend itself and preserve its qualitative military edge.”The letter continued that “the nature and breadth of the current threats” facing Israel “mean that the United States must enhance its investment in the long-term security requirements of our closest Middle East ally.”Kaine, who has visited Israel on several occasions and whom former Ambassador to the US Michael Oren described in a recent radio interview as a good friend of the state, was a strong supporter of the Iran nuclear deal last year, and was one of eight senators to boycott Netanyahu’s speech on the matter to a joint session of Congress in March 2015.Netanyahu said in the Knesset last week that he hoped to conclude the MoU in a number of weeks.Earlier in the year there was some speculation that Netanyahu wanted to wait to finalize the agreement until a new administration was in place, hoping to perhaps receive a better deal with the next president. Officials close to Netanyahu, however, have consistently denied that this was ever his intent.Michael Wilner contributed to this report