With the Democrats preparing for their national convention, party leaders are worried that Sanders' continued campaigning against Clinton will weaken her in the general election. 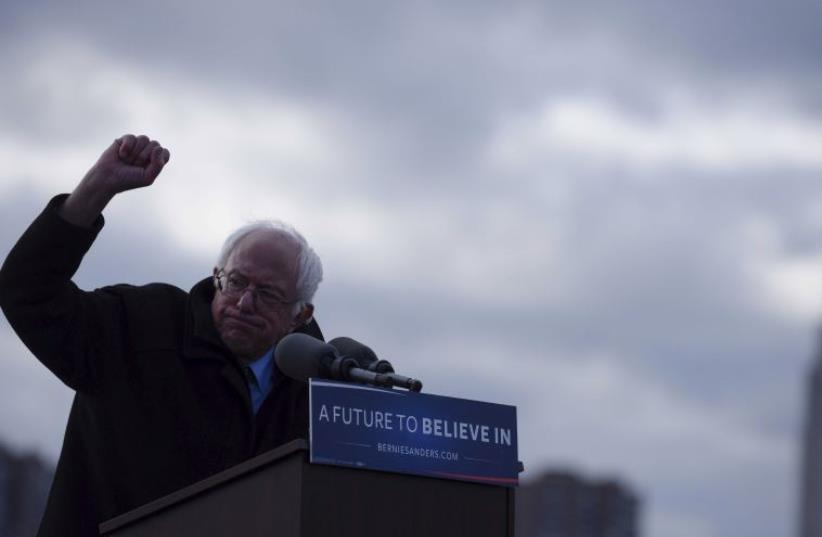 The Empire State Building is seen in the background from Transmitter Park as U.S. Democratic presidential candidate and Senator Bernie Sanders gestures during a campaign rally in the Brooklyn borough of New York April 8, 2016.
(photo credit: REUTERS)
Advertisement
Bernie Sanders, the Vermont senator whose insurgent campaign for the Democratic nomination will in all likelihood fall short of the necessary number of delegates needed for a White House run, is reportedly using his newfound political clout to extract concessions from the party on a host of issues, including Israel. the Vermont senator will demand that the Democratic Party platform include an explicit statement that reflects "a more balanced position regarding Israel and the Palestinians."Sanders is negotiating with Democratic Party leaders who are eager to form a united front and bring the Vermont senator's supporters into the fold so as to enable the presumptive nominee, Hillary Clinton, to focus her efforts on defeating the Republican pick, Donald Trump.With the Democrats preparing for their national convention in Philadelphia this summer, party leaders are worried that Sanders' continued campaigning against Clinton will weaken her in the general election.Although he has statistically no chance of surpassing Clinton in the delegate vote, Sanders has vowed to press on with his campaign in the hopes of advancing key aspects of his agenda and shaping the Democratic Party for years to come.In exchange for a clear-cut endorsement of Clinton, Sanders is demanding that the party platform contain more explicit language regarding US policy toward Israel.The Washington Post quotes a Sanders aide as saying that the issue of Israel is "absolutely, legitimately a point of conversation," something that "has made some of Clinton's backers nervous."Specifically, Sanders wants the Democratic Party to favor an "even-handed" approach to the Israel-Palestine dispute.“On one hand there is not an enormous amount of difference between them. They are both pro-Israel, they are both pro-peace,” a Clinton supporter told the newspaper. “But in the context of the campaign terms like ‘even-handed’ can come to mean that the United States is signaling a shift [which would be opposed by Clinton]."