Bernie Sanders: A good part of my father’s family was killed by the Nazis. And that lesson that I learned as a very young person is politics is a serious business. 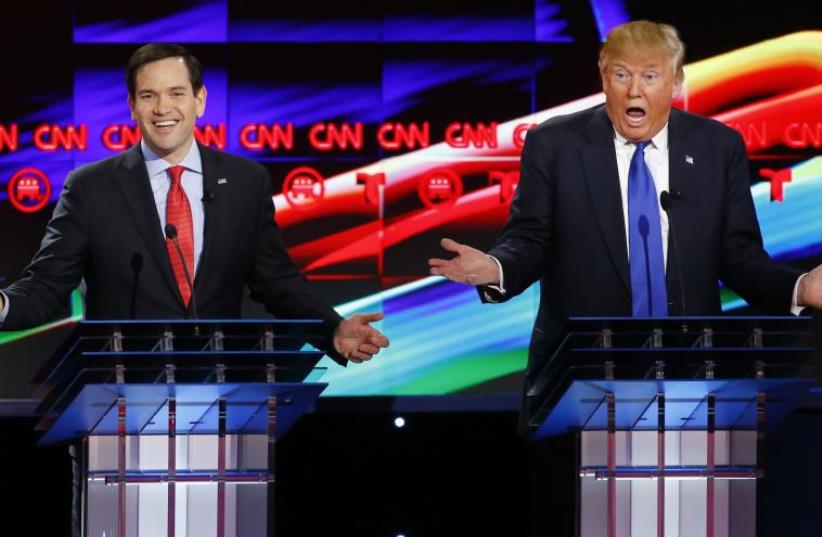 Republican US presidential candidates Marco Rubio (L) and Donald Trump speak simultaneously at the debate sponsored by CNN for the 2016 Republican US presidential candidates in Houston, Texas, February 25, 2016.
(photo credit: REUTERS)
Advertisement
WASHINGTON —  In a stinging debate exchange, Donald Trump’s professions of neutrality in the Israeli-Palestinian conflict became a front and center campaign issue.All four of the real estate magnate’s rivals for the Republican presidential nod took him to task Thursday night on the debate stage in Houston for his position on Israeli-Palestinian peacemaking, which he says requires being an honest broker.Separately, Sen. Bernie Sanders, I-Vt., vying with Hillary Clinton for the Democratic presidential nod, gave one of his most expansive answers so far during the presidential campaign on his Jewish identity, in a Chicago town hall.Sen. Marco Rubio, R-Fla., introduced the topic of Trump’s neutrality early in the debate, in arguing that Trump, who has won three of the four early nominating contests, was closer to Democrats than Republicans. “He says he’s not going to take sides in the Palestinians versus Israel,” Rubio said.Trump at an MSNBC town hall last week said, pressed on his positions on the conflict, “Let me sort of be a neutral guy, I don’t want to say whose fault is it, I don’t think it helps.”The CNN moderators asked Trump about Israel and he listed what he said were pro-Israel credentials, including once acting as Grand Marshall of the Israel Day parade in new York, giving to unspecified Israeli causes, and being awarded the Jewish National Fund “Tree of Life” award.Trump also continued to insist that it would be unwise to reveal his hand before attempting to broker Israeli-Palestinian peace. “It doesn’t do any good to start demeaning the neighbors,” he said. “With that being said, I am totally pro-Israel.”The other candidates pounced. Palestinian terrorists “are not equivalent to the IDF officers protecting Israel,” said Sen. Ted Cruz, R-Texas.“The position you’ve taken is an anti-Israel position,” Rubio said, claiming that while Israel has sacrificed for peace, “the Palestinian Authority has walked away from multiple generous offers.” Ohio Gov. John Kasich noted his pro-Israel record dating back to the 1980s and 1990s, when he was a congressman. “I’ve been a strong supporter of Israel longer than anyone on this stage,” he said.Ben Carson, a retired neurosurgeon, recalled his own visit to Israel last year, and said while it “doesn’t mean we can’t be fair to other people,” the United States should treat Israel like its favored child.Trump countered by claiming stronger negotiating deals as a longtime businessman, and Rubio interjected: “The Palestinians are not a real estate deal … a deal is not a deal when you’re dealing with terrorists, have you negotiated with terrorists?”Hillary Rodham Clinton, the Democratic frontrunner, has also taken aim at Trump for his professions of neutrality. Speaking on CNN on Sunday, she said US policy should take into account both the close US-Israel relationship and the need for a two-state solution. Trump had “missed the mark” by claiming neutrality, she said.“First of all, Israel is our partner, our ally,” Clinton said. “We have long-standing and important ties with Israelis going back to the formation of the state of Israel.“I will defend and do everything I can to support Israel, particularly as the neighborhood around it seems to become more dangerous and difficult,” Clinton said.That position and shepherding the sides toward peace “are not mutually exclusive,” she said. “I happen to think that moving toward a two-state solution, trying to provide more support for the aspirations of the Palestinian people is in the long-term best interest of Israel as well as the region and the people themselves,” she said.Trump several times in recent days has said that he would be a “great friend” of Israel and has slammed the Obama administration for last year’s Iran nuclear deal, which Israel opposed.Sanders, at a University of Chicago town hall on Thursday broadcast by MSNBC, was asked by a Jewish student to speak about his faith. The student noted that Sanders had been reticent about discussing his Judaism.“Obviously, being Jewish is very, very important to me,” Sanders said. “I am very proud of my heritage. And what comes to my mind so strongly as a kid growing up in Brooklyn and seeing people with numbers on their wrists — you probably have not seen that — but those were the people who came out of the concentration camps. And knowing that, my — a good part of my father’s family was killed by the Nazis. And that lesson that I learned as a very young person is politics is a serious business. And when you have a lunatic like Hitler gaining power — 50 million people died in World War 2. So I am very, very proud to be Jewish and I’m proud of my heritage.”Separately, the Anti-Defamation League called on Trump to distance himself from white supremacists who have intensified their call for his election in recent weeks.“Mr. Trump may have distanced himself from white supremacists, but he must do so unequivocally,” said a statement issued Thursday in the name of Marvin Nathan, ADL National Chair, and Jonathan Greenblatt, ADL CEO. “It is time for him to come out firmly against these bigoted views and the people that espouse them.”David Duke, a white supremacist, said this week that voting against Trump was tantamount to treason. Additionally, a supremacist political action committee has been making recorded calls urging people to vote for Trump.