Poll comes amid renewed FBI email probe of the former secretary of state. 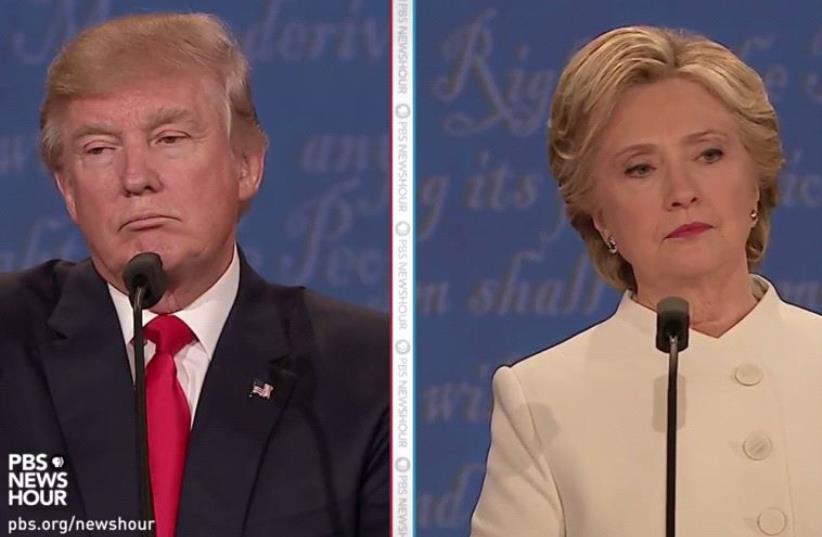 Trump and Clinton
(photo credit: screenshot)
Advertisement
For the first time since May, Hillary Clinton trails Donald Trump in the latest ABC News/Washington Post poll, produced by Langer Research Associates.The poll, which comes amid the renewal of a probe into Clinton's emails sent on a private server while she was secretary of state, has the Democratic candidate trailing Trump by a single point, 46% to 45%.A random national sample of 1,128 likely voters participated in the poll conducted between October 27 and 30.  A Reuters/Ipsos opinion poll released on Monday told a different story, with Clinton leading Trump by five percentage points. In that poll,some 44 percent of likely voters said they would support Clinton, while 39 percent said they would support Trump, according to the Oct. 26-30 survey. Clinton had held a 6 point advantage over Trump in the five-day tracking poll last Thursday.Other polls have shown Clinton's lead slipping. Real Clear Politics, which averages the results of most major polls, shows that Clinton's lead has declined from 4.6 points on Friday to 2.5 points on Monday.Federal Bureau of Investigation Director James Comey told Congress in a letter made public on Friday that his agency was looking into new emails that may be connected to Clinton, who had been probed by the FBI over her use of a private server and how she handled classified information while America's top diplomat.The FBI has revealed very little to the public about the new emails under investigation, except that they were uncovered during an unrelated investigation into the estranged husband of a top Clinton aide.In July, Comey concluded that Clinton and her staff were "extremely careless" with their handling of classified information, but that there was not enough evidence to bring criminal charges. On Friday, Comey told Congress, "We don't know the significance of this newly discovered collection of emails."