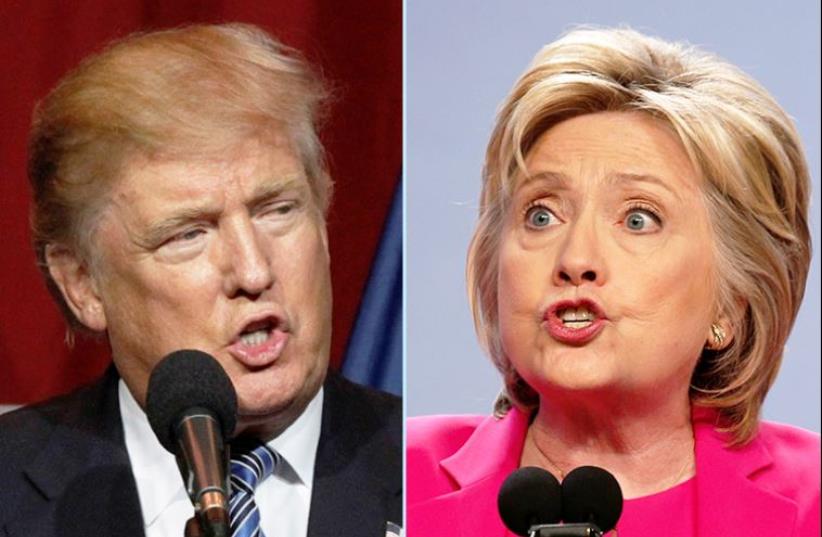 Trump and Clinton
(photo credit: REUTERS)
Advertisement
WASHINGTON - The US presidential race is tied going into the major parties' national conventions and Democrat Hillary Clinton has been damaged by the FBI investigation into her email use while secretary of state, a new opinion poll showed on Thursday.The New York Times/CBS News poll showed 67 percent of voters surveyed said Clinton was not honest and trustworthy, up 5 percentage points from a CBS poll conducted last month before the FBI made its findings public.As Donald Trump prepares to accept the Republican presidential nomination next week, the poll showed him in a dead heat with Clinton in a general election matchup. Each candidate drew 40 percent of the vote, compared with the 6 percentage point lead enjoyed by Clinton in last month's survey, the poll showed.The margin of error was 3 percentage points in the CBS News/New York Times poll, which was conducted by telephone July 8-12 among a random sample of 1,600 adults nationwide, including 1,358 registered voters.The survey showed 62 percent of voters surveyed distrust Trump as well."But Mrs. Clinton's shifting and inaccurate explanations of her email practices at the State Department appear to have resonated more deeply with the electorate," the Times wrote.FBI Director James Comey said last week Clinton was "extremely careless" in the handling of classified information but the investigation found no evidence she or her colleagues intended to violate laws.The Times/CBS poll echoes the finding of a Quinnipiac Poll released on Wednesday that showed Trump pulling just ahead of Clinton in the so-called swing states of Florida and Pennsylvania as the former US senator and first lady lost ground on honesty and moral standards.In contrast to the New York Times/CBS News poll, a Reuters/Ipsos online opinion poll released on Tuesday showed Clinton leading Trump by 13 points at a national level, with 46 percent to Trump's 33 percent support among likely voters. The election is on Nov. 8.