Trump, who has gained momentum after losing the Wisconsin primary to Cruz on April 5, was also expected to win the other two Northeastern states that voted, Rhode Island and Delaware. 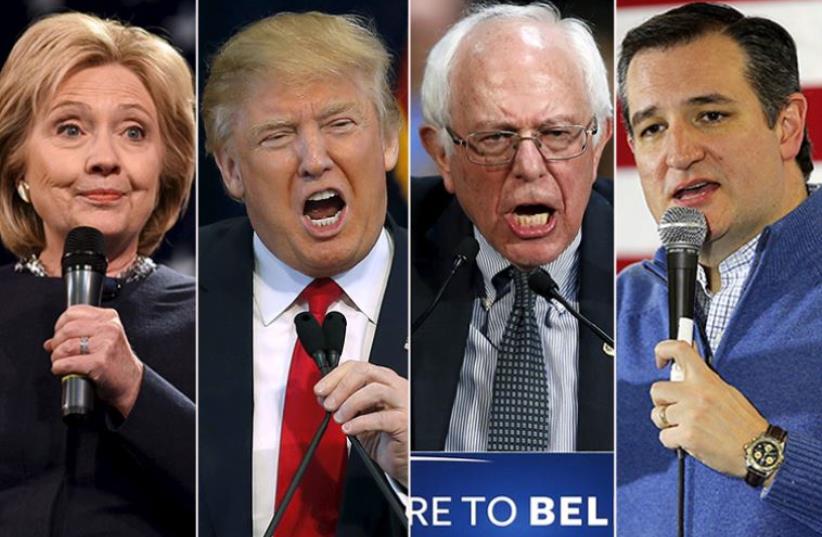 Clinton, Trump, Sanders and Cruz
(photo credit: REUTERS)
Advertisement
WASHINGTON - Donald Trump swept primaries in five Northeastern states on Tuesday, moving closer to winning the Republican presidential nomination as he easily defeated rivals Ted Cruz and John Kasich.Trump scored victories in Pennsylvania, Maryland, Connecticut, Rhode Island and Delaware, US television networks projected. His margin of victory in each state appeared to be even larger than in his home state of New York a week ago, a major show of strength that sets the stage for a potentially pivotal battle next week in Indiana.On the Democratic side, Hillary Clinton won in Maryland, Delaware and Pennsylvania, while Bernie Sanders won Rhode Island. Connecticut's Democratic vote was too close to call.Clinton, in a victory speech in Philadelphia, took aim at Trump for accusing her of trying to "play the woman card" in seeking to become the first female US president."Well if fighting for women's healthcare and paid family leave and equal pay is playing the woman card, then deal me in," she said to cheers.Sanders, speaking to a big crowd in Huntington, West Virginia, showed no signs of getting out of the race and said he was shedding light on inconvenient truths about how hard life was these days for some Americans."The reason that we are generating this enthusiasm is because we are doing something very unusual in contemporary politics. We are telling the truth," he said.Although the race remains fluid, Trump's wins made it less likely that Republicans would choose their nominee for the Nov. 8 presidential election at a contested convention in July in Cleveland, an outcome seen by Cruz and Kasich as their only chance at the nomination."They should drop out because frankly they have no path to victory," Trump told a Time interviewer at a magazine event in New York honoring influential Americans.Cruz, already looking ahead to Indiana's Republican primary on May 3, addressed a crowd in that state just as polls were closing in the Northeastern states."I got good news for you: Tonight, this campaign moves back to more favorable terrain," the U.S. senator from Texas said in Knightstown, Indiana, inside the high school gymnasium made famous by the underdog movie, "Hoosiers."A total of 118 pledged Republican delegates were at stake in addition to 54 unbound Pennsylvania delegates.Cruz and Ohio Governor John Kasich, the third Republican in the race, have formed an anti-Trump alliance in an effort to stop the New York billionaire from reaching a first-ballot victory at the July convention in Cleveland.Former Republican presidential candidate Ben Carson, a Trump supporter, said the deal between Kasich and Cruz would backfire because it smacked of backroom politics.