The claim stems from Abedin's assistant editor position with the Journal of Muslim Minority Affairs, a small academic publication edited by Abedin's mother, where she had worked from 1996-2008. 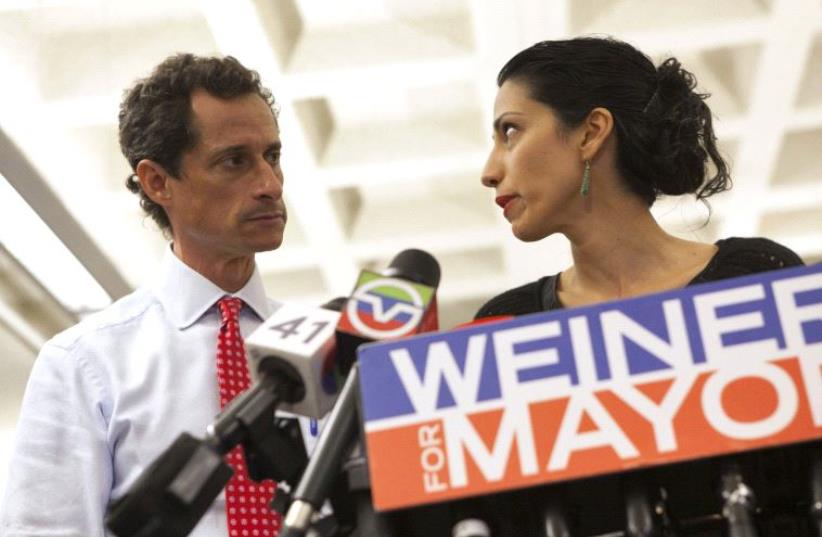 New York mayoral candidate Anthony Weiner and Huma Abedin, a top aide to Democratic presidential candidate Hillary Clinton
(photo credit: REUTERS)
Advertisement
Republican presidential candidate Donald Trump earlier this week referenced for the first time a conspiracy theory tying a top Hillary Clinton aide to radical Islam, according to weekly publication The Nation.  During a radio interview in Seattle Monday, Trump was asked to comment on news that former US congressman Anthony Weiner and his wife, vice chairwoman of Clinton's presidential campaign Huma Abedin, had separated due to lewd pictures of Weiner being discovered on the Internet.﻿The Nation reported Trump as saying that Weiner was “a pervert and just a very sick guy,” during the broadcast.   Trump  then said: “By the way—check, take a look at where [Abedin] worked, by the way, and take a look at where her mother worked, and works. You take a look at the whole event. But in the case of Anthony Weiner, she’s married to a guy that’s uncontrolled, and uncontrollable. He’s a sick person. And you know she has access to classified information. Huma Abedin has access to classified information. How Hillary got away with that one, nobody will ever know.”  The claim stems from Abedin's assistant editor position with the Journal of Muslim Minority Affairs, a small academic publication edited by Abedin's mother, where she had worked from 1996-2008.The New York Post were the first to brand the JMMA as a "radical journal," recently running an article stating the publication "opposed women’s rights and blamed the US for 9/11."The Washington Post later described the JMMA as “a sober academic journal with a range of viewpoints on Muslim life around the world.”  When asked for further clarification about the comments, a spokesperson for the Trump campaign said that ﻿“there is nothing more to add but I would definitely not characterize that as an ‘accusation,’ it’s a statement or a suggestion.”The "suggestion" that Abedin has radical Islamic ties is a popular trope among Trump's voter base, and has been echoed by right-wing politicians who have thrown their support behind Republican candidate.Former representative Michele Bachman recently speculated that Abedin was influencing Democratic presidential candidate Hillary Clinton in a quest to help promote  "Sharia law" across the United States. "Abedin, Saudi-based during her formative years, having grown up in the family business of advancing Islamic Shariah rule across the globe, may certainly use her position of influence to turn Hillary Clinton toward a decidedly pro-Shariah law view in the US,” she said.  Bachman has been attacking Abedin and her Muslim background since 2012, drawing a rebuke from fellow lawmakers including Arizona Republican Senator John McCain, The Nation noted. Originally from Michigan, Abedin moved with her family to Saudi Arabia when she was two where she was raised and lived until returning to the US for college.