Trump urges ban on immigration from countries with 'history of terrorism'

Trump's speech in Manchester, New Hampshire, was in response to the deadliest mass shooting in modern US history. 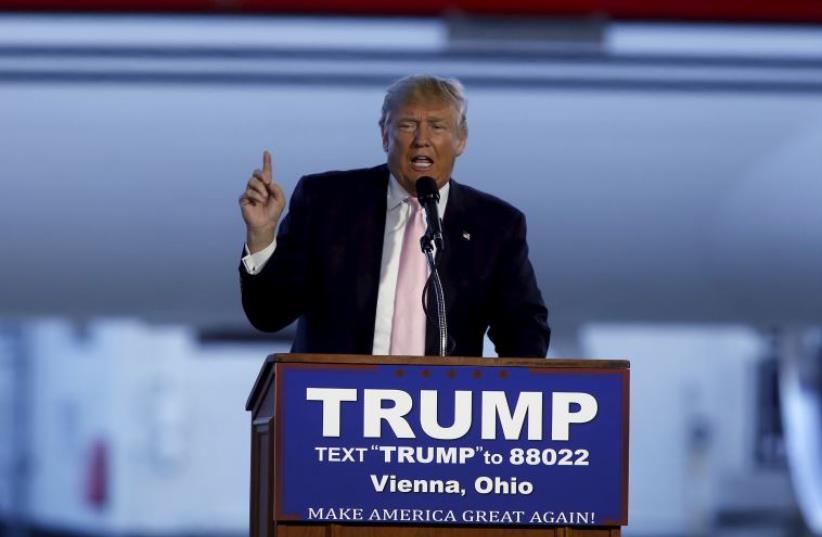 Republican presidential candidate Donald Trump speaks at a campaign rally at Winner Aviation in Youngstown, Ohio March 14, 2016
(photo credit: REUTERS)
Advertisement
Republican presidential candidate Donald Trump said on Monday he would suspend immigration to the United States from countries "where there is a proven history of terrorism" against the West, his strongest reaction yet to the Orlando nightclub massacre.Trump's speech in Manchester, New Hampshire, was in response to the deadliest mass shooting in modern US history. 49 people were killed and 53 were wounded at the gay nightclub early on Sunday before gunman Omar Mateen was killed by police.Trump said that, if elected on Nov. 8, he would use the executive authority of the presidency to impose stronger controls on immigration, one of the main themes of his campaign."I would use this power to protect the American people. When I'm elected, I will suspend immigration from areas of the world where there is a proven history of terrorism against the United States, Europe or our allies until we fully understand how to end these threats," the 69-year-old businessman said.He noted that the parents of the gunman, Omar Mateen, 29, were born in Afghanistan. Mateen, who was born in the United States, pledged loyalty to the Islamic State militant jihadist group.Pointing to specific incidents such as the Sept. 11, 2001, attacks, Trump also said threats were posed by people with roots in Pakistan, Saudi Arabia and Somalia.He stressed that his proposed ban would be temporary and would last until "when as a nation we are in a position to properly screen these people coming into our country. They're pouring in, and we don't know what we're doing."In her response to the massacre, the presumptive Democratic nominee, Hillary Clinton, warned against demonizing Muslim Americans.Goaded by Trump, Clinton, 68, referred to Islamic State militants as "radical jihadist" after repeatedly refusing to go along with Republicans' description of the threat as "radical Islamic terrorism.""The Orlando terrorist may be dead, but the virus that poisoned his mind remains very strong, and we must attack it," she said in a speech in Cleveland.In proposals for dealing with threats of violence at home and abroad, the former US secretary of state called for increased efforts to remove Islamic State propaganda from the internet, more air strikes in areas held by the group and better coordination with allies in the region.She specifically called out three US allies - Saudi Arabia, Qatar and Kuwait - for allowing its citizens to fund mosques and schools that train jihadists.Clinton also proposed stricter gun control laws, reiterating previous calls to prohibit people on terrorism watch lists from buying firearms. She pointed out that while the Federal Bureau of Investigation was aware of Mateen as a possible threat, he was still able to purchase a gun legally.Clinton has called for a complete ban on assault-style guns."It's important that we stop the terrorists from getting the tools they need to carry out the attacks, and that is especially true when it comes to assault weapons like those used in Orlando and San Bernardino," California, Clinton said, drawing a standing ovation from the crowd.Clinton called on Americans to come together like they did after the Sept. 11, 2001 attacks. She pointed out that, at the time, she was a Democratic US senator representing New York, while the U.S. president, New York governor and New York City mayor were all Republicans."Americans from all walks of life rallied together with a sense of common purpose on Sept 12. ... We had each others' backs. We did not attack each other, we worked with each other to protect our country and rebuild our city," Clinton said.Trump challenged Clinton to explain why she favored letting Syrian civil war refugees into the United States. He said his policies would better protect American women, gays and lesbians, Jews and Christians. Trump's support among women and gay voters lags far behind that of Clinton."Radical Islam is anti-woman, anti-gay and anti-American," said Trump. "I refuse to allow America to become a place where gay people, Christian people, and Jewish people are the targets of persecution and intimidation by radical Islamic preachers of hate and violence.""The bottom line is that Hillary supports the policies that bring the threat of radical Islam into America, and allow it to grow overseas," Trump said.Trump also lashed out at President Barack Obama by questioning his motives for refusing to use the term "radical Islamic terrorism" in describing such attacks. He argued that both the president and Clinton were unfit to lead the nation, and said he would expand US intelligence capabilities.White House spokesman Josh Earnest refused to address Trump's comments directly at a daily news briefing, characterizing Trump's remarks as "small" in the aftermath of the massacre, and as such, neither he nor Obama would focus on them.