Countering the media hype, Russia watcher says the Kremlin could still prefer the known rather than the unfamiliar candidate. 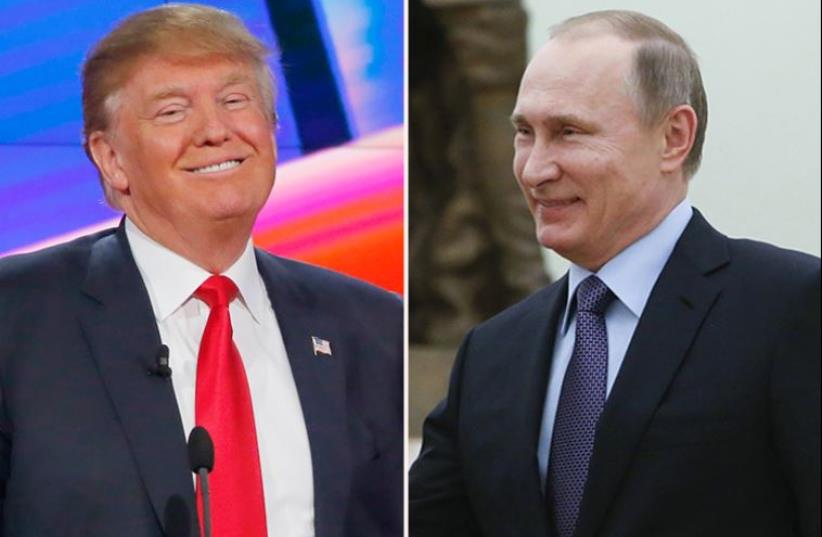 Trump and Putin
(photo credit: REUTERS)
Advertisement
Russia dismissed accusations on Thursday that it was involved in the hacking scandal of the Democratic Party emails and Russia watchers told The Jerusalem Post the media are missing the real issue, which is how Russia-US cooperation would be if Donald Trump becomes president.“As Trump promises to focus on fighting Islamic State, he clearly is seeking Russian cooperation and is looking to help Russia out of its international isolation over the war in Ukraine and occupation of the Crimea. It is a deal that President Vladimir Putin can’t refuse,” said Ariel Cohen, a non-resident senior fellow at the Atlantic Council.Trump on Wednesday invited Russia to dig up tens of thousands of “missing” emails from Democratic rival Hillary Clinton’s time at the US State Department, prompting Democrats to accuse him of urging foreigners to spy on Americans.Trump, who later said his comments were intended sarcastically, spoke out after President Barack Obama said it is possible Russia would try to influence the US presidential election after a leak of Democratic National Committee emails that experts have blamed on Russian hackers.Kremlin spokesman Dmitry Peskov, who has already twice denied any Russian involvement in hacking Democratic Party emails, said the allegations were a “vivid example of the use of anti-Russian sentiment for electoral purposes in the United States.”Cohen added that Washington is shocked by the allegation of Russian hacking of the Democratic National Committee. “Imagine if Watergate was committed not by Richard Nixon’s ‘plumbers’ but by the Soviet KGB.“This scandal raises important questions about US cyber security, foreign involvement in American presidential politics, and the future Putin–Trump potential rapprochement,” he said.Stephen Sestanovich, George F. Kennan senior fellow for Russian and Eurasian Studies at the Council on Foreign Relations and a professor at Columbia University, said two things are clear: “Trump has for years wanted to expand his business to Russia, and seems to have failed. So maybe he’s not the Putin agent people are claiming – nor the brilliant businessman he himself claims.”Daniel (Dima) Course, a founding member of the Israeli Center for Russian and Eurasian Studies (ICRES) and a researcher at Ariel University, told the Post, “I tend not to trust anything published by opponents at the height of an election campaign.”Course estimates that from the Kremlin’s perspective – as represented by Russian foreign policy analysts such as those from the Ministry of Foreign Affairs or from intelligence – it could still prefer the known rather than the unfamiliar candidate.“That’s why I’m not sure they are really preferring Donald Trump,” he asserted, adding that he is unpredictable regardless of his rhetoric. Therefore, he says, the media tend to overstate that Trump would be Russia’s preferred candidate.“In Moscow Hillary is associated with her husband, who evokes mostly positive connotations in Russia.” It should be remembered, he said, that the deterioration of Russian-American relations came after Bill Clinton left the White House.However, Course says that Putin may see Trump as more attractive since he could view him in the mold of George W. Bush and the opposite of Barack Obama.Another ICRES expert who did not want to be named said he has not seen any scholars or serious commentators suggesting that there is any real cooperation between Trump and Putin.“Although the Kremlin does support some extremist figures across Europe such as Marine Le Pen and others in Germany, any serious cooperation between Trump and Putin is unlikely,” said the expert.Trump seems more likely to find common ground with the Russians, but at the same time, more likely to get into a serious fight with them, the expert added.Reuters contributed to this report.