Democratic candidate Sanders calls for normalizing US ties with Iran

During Democratic debate, Clinton praises Iran deal, but says she still regards Tehran as a rival not meriting normalization. 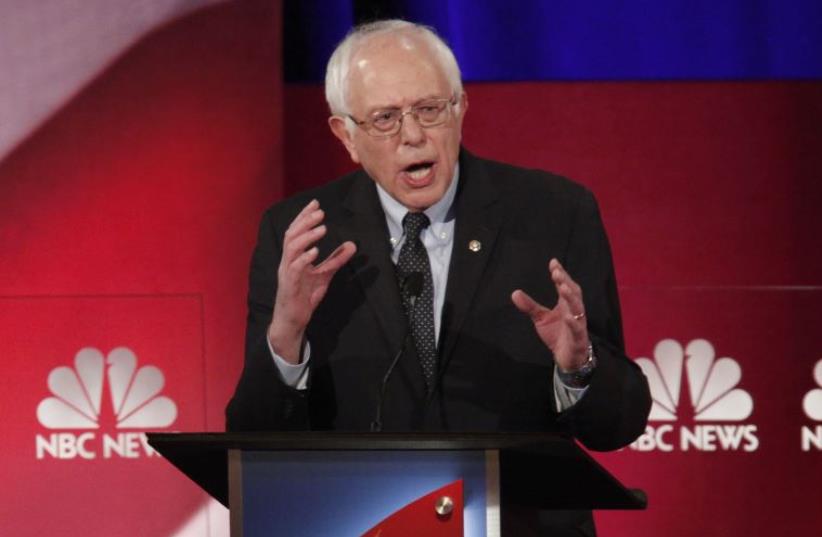 Democratic US presidential candidate and US Senator Bernie Sanders speaks at the NBC News - YouTube Democratic presidential candidates debate
(photo credit: REUTERS)
Advertisement
WASHINGTON — Bernie Sanders, the Jewish senator vying for the Democratic presidential nod, called for normalizing relations with Iran.“I think what we’ve got to do is move as aggressively as we can to normalize relations with Iran,” Sanders said Sunday evening during a debate with his rivals Hillary Rodham Clinton and Martin O’Malley in South Carolina.The NBC debate moderators launched the foreign policy section of the debate in its second hour with a request for responses to the formal implementation this weekend of the sanctions relief for nuclear restrictions deal reached last year between Iran and six major powers. On Saturday, UN inspectors certified Iran had rolled back its nuclear program and the United States and Europe lifted some sanctions.Sanders’ call for normalization goes beyond President Barack Obama’s stated agenda, which is to neutralize Iran’s nuclear threat while continuing to confront its disruptions in the region through separate sanctions and diplomatic pressure.“Understanding that Iran’s behavior in so many ways is something that we disagree with, their support for terrorism, the anti-American rhetoric that we’re hearing from of their leadership is something that is not acceptable,” Sanders said.“On the other hand, the fact that we’ve managed to reach an agreement, something that I’ve very strongly supported that prevents Iran from getting a nuclear weapon and we did that without going to war,” he said.He said he hoped the relationship would become more positive but would stop short of exchanging ambassadors.“I think the goal has got to be as we’ve done with Cuba, to move in warm relations with a very powerful and important country in this world,” he said.Clinton, the former secretary of state who helped shape the deal, praised it, but like Obama, said she still regarded Iran as a rival not meriting normalization.“They have been so far, following their requirements under the agreement,” she said.“But I think we still have to carefully watch them. We’ve had one good day over 36 years, and I think we need more good days before we move more rapidly toward any kind of normalization. And we have to be sure that they are truly going to implement the agreement. And then, we have to go after them on a lot of their other bad behavior in the region, which is causing enormous problems in Syria, Yemen, Iraq and elsewhere.”Republicans, joined by Israel’s government, still regard the deal as a bad one leaving Iran on the verge of becoming a nuclear weapons state.The debate, the fourth so far among Democrats, was the most contentious so far for the party, a result of Sanders catching up to Clinton in polling in Iowa and New Hampshire just weeks ahead of primary voting in those states.Clinton focused on Sanders record on gun control, depicting him as inconsistent, as well as on his plans to overhaul health care, which she said risked the reforms enacted by Obama. Sanders shot back with criticisms of Clinton’s ties to financiers, including her acceptance of speaking fees from Wall Street firms.Also participating in the debate was O’Malley, a former governor of Maryland who has yet to score more than single digits in polling.