Russia's Internet Research Agency "had a strategic goal to sow discord in the US political system, including the 2016 US presidential election," the indictment states. 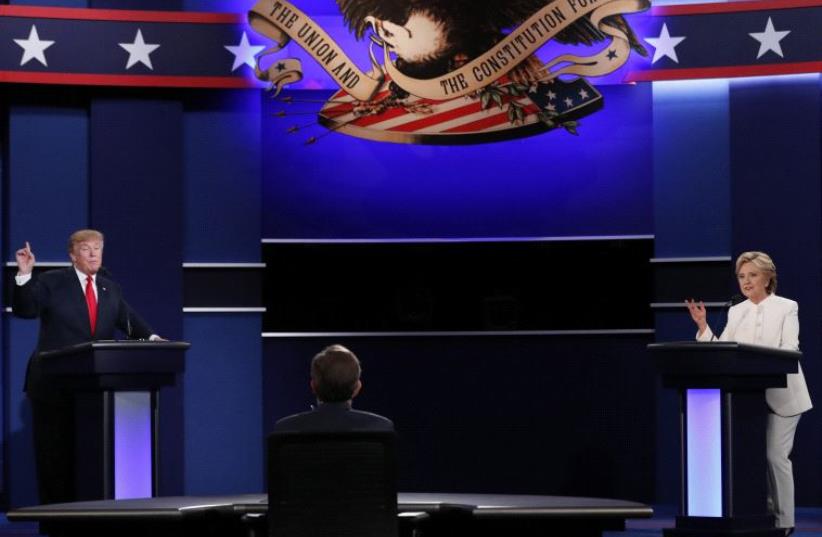 Republican US presidential nominee Donald Trump and Democratic US presidential nominee Hillary Clinton take part in their third and final 2016 presidential campaign debate in Las Vegas, Nevada, October 19, 2016
(photo credit: REUTERS)
Advertisement
WASHINGTON - A Russian Internet agency and more than a dozen Russians interfered in the US election campaign from 2014 through 2016 in a multi-pronged effort with the aim of supporting then-businessman Donald Trump and disparaging his rival Hillary Clinton, the US Special Counsel said in an indictment on Friday.The 37-page indictment filed by Special Counsel Robert Mueller described a conspiracy to disrupt the US election by people who adopted false online personas to push divisive messages; traveled to the United States to collect intelligence; and staged political rallies while posing as Americans.Russia's Internet Research Agency "had a strategic goal to sow discord in the US political system, including the 2016 US presidential election," the indictment states."Defendants posted derogatory information about a number of candidates, and by early to mid-2016, Defendants' operations included supporting the presidential campaign of then-candidate Donald J. Trump... and disparaging Hillary Clinton."The indictment broadly echoes the conclusions of a January 2017 US intelligence community assessment, which found that Russia had meddled in the election, and that its goals eventually included aiding Trump.President Trump has been briefed on the indictment announced on Friday, White House spokeswoman Sarah Sanders saidTrump has never unequivocally accepted that report, and has denounced Mueller's probe into whether his campaign colluded with the Kremlin as a "witch hunt."Facebook and Twitter both declined to comment on the indictment.The court document appeared likely to provide ammunition to Democrats and others arguing for a continued aggressive probe of the matter.The indictment names the Internet Research Agency, based in St. Petersburg, Russia; 13 Russian nationals; and two other companies.The 2017 intelligence agency finding has spawned investigations into any ties between Republican Trump's campaign and Moscow. Russia denies interfering in the election. Trump denies any collusion by his campaign.Director of National Intelligence Dan Coats told the Senate Intelligence Committee on Tuesday that he had already seen evidence Russia was targeting US elections in November, when Republican control of the House of Representatives and Senate are at stake, plus a host of positions in state governments."Frankly, the United States is under attack," Coats said at an annual hearing on worldwide threats.Russia would try to interfere in the 2018 US midterm elections by using social media to spread propaganda and misleading reports, much as it did in the 2016 campaign, intelligence chiefs said at the hearing.