US Jews contribute half of all donations to the Democratic Party

Jewish donors give 25% of the Republican National Convention’s cash. 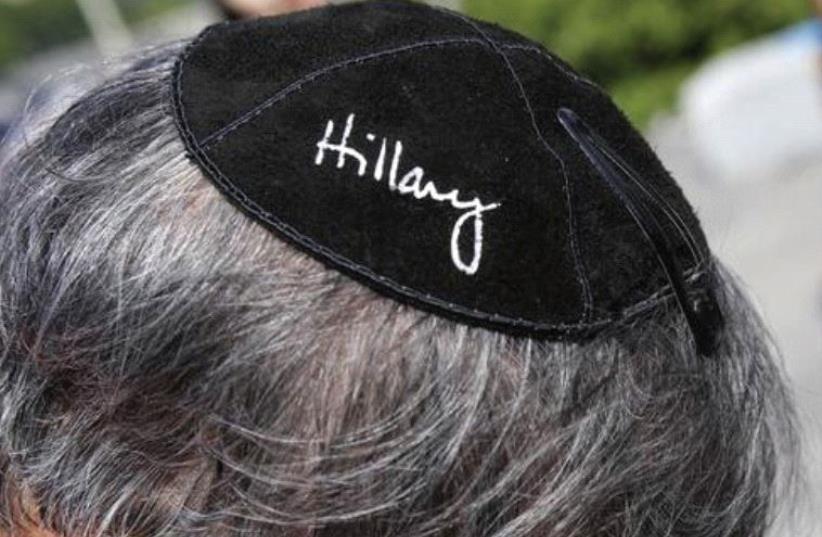 JEWISH SUPPORTERS wear kippot showing their support for Democratic nominee Hillary Clinton.
(photo credit: REUTERS)
Advertisement
A new study argues that the large majority of American Jews have a deep-seated notion that being Jewish is inextricably bound to being liberal.That idea took hold after the large waves of Jewish immigration to the US in the late 19th century, according to the study’s author, American history professor Gil Troy.American Jewish liberalism and association with the Democratic party is showing no signs of abatement, despite many predictions to the contrary since Ronald Reagan’s presidency, according to Troy’s research, which is being published by the Ruderman Family Foundation's Program for American Jewish Studies at the University of Haifa.In particular, Troy notes that president Franklin Roosevelt, author of the New Deal program of social initiatives and policies, became a hero for American Jews who benefited from these measures and drew them even further toward the Democratic Party.“Liberalism worked for Jews in the US. It gave them extraordinary opportunities and allowed them to enjoy political freedom,” Troy told The Jerusalem Post.“The degree to which liberalism and liberal ideas has been good for the Jews in America helps explain why so many American Jews think liberalism and Judaism are the same,” he said.In the current generation of what Troy describes as “freedom- fromers,” liberal Jews are proudly American and have adopted past and modern fears of restrictions imposed by government or religion, the study says.In addition, Troy says despite perceptions that Jews vote for Jewish interests, in particular for Israel’s interests, “American Jews are more pro-choice than pro-Israel when voting.”This does not mean to say they are not pro-Israel, but rather that the intensity of commitment to pro-freedom, liberal ideas is more intense than the commitment to Israel, he says, adding that according to polling data, the overwhelming majority of US Jews do not base their vote on Israeli interests.Troy also looked at what he describes as “the disproportionate frenzy surrounding the Jewish vote,” when bearing in mind that Jews comprise just 2 percent of the US electorate.The reason for such intense scrutiny is the outsize contributions of Jewish donors to US political campaigns, with Jewish donors contributing a whopping 50% of funds received by the Democratic Party and 25% to the Republican Party, Troy says.He also says the “megaphone effect” of the US’s Electoral College election system is particularly pronounced in some key swing states with large Jewish populations, such as Florida, Ohio, Pennsylvania and Michigan.As for this election, Troy estimates that the Jewish vote will follow patterns seen in recent presidential elections, with approximately 70% of Jews voting for Democratic candidate Hillary Clinton and the remainder voting for Republican candidate Donald Trump.Troy said that in meetings he conducted with Republican officials, they expressed surprise and bewilderment that regardless of the Republican Party’s staunch and even hawkish pro-Israel stances, the large majority of US Jews still vote for the Democratic Party.But American Jews have remained faithful to their liberal ideology, as reflected by the 78% of the Jewish vote garnered by President Barack Obama in the 2008 election when he defeated strongly pro-Israel Sen. John McCain and the 69% support he took in 2012 against former Massachusetts governor Mitt Romney, despite accusations against Obama regarding his dealings with Israel during his first term.Finally, Troy predicts that in the near to medium future, there is little chance of a significant Jewish swing towards the Republican party and away from liberalism.Although religious Orthodox American Jews are more likely to vote Republicans, Troy says their relatively small size compared to the non-Orthodox and non-affiliated Jewish community means that it will be some time before this trend has a discernible impact.“Thus, despite repeated eulogies for the alliance, the liberal-Jewish-Democratic connection has strengthened not weakened since Ronald Reagan,” Troy wrote. “Even though the Republican Party is more pro-Israel than ever, and sometimes more ‘pro-Israel’ (however you define that) than the Democratic Party, American Jewish liberalism has become a mentality, a sensibility, an ideology, a cultural identity.”