"She is careful. She is measured. She is serious," Cruz says. "She doesn't get rattled." 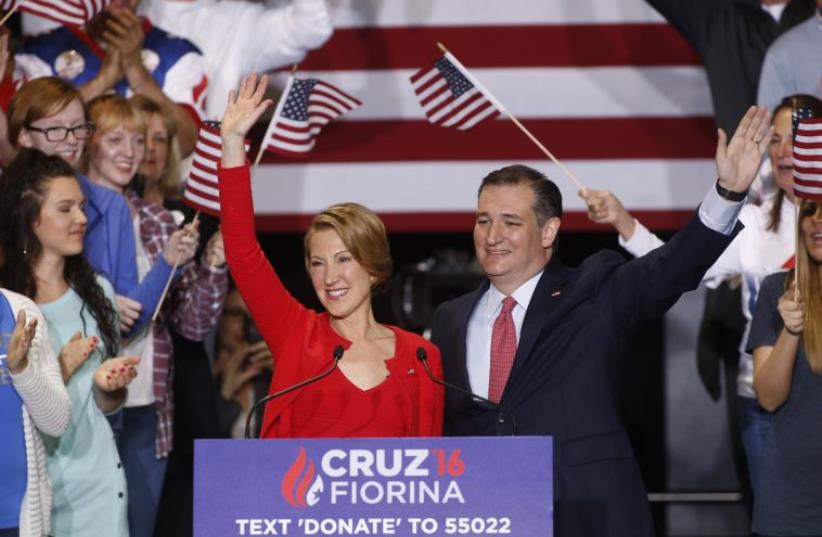 Ted Cruz holds a campaign rally to announce Carly Fiorina as his running mate in Indianapolis, Indiana, April 27, 2016.
(photo credit: REUTERS)
Advertisement
INDIANAPOLIS - US Republican presidential candidate Ted Cruz, in a last-ditch bid to slow front-runner Donald Trump's momentum, on Wednesday named former business executive Carly Fiorina to be his vice presidential running mate if he wins the nomination.After suffering a series of crushing losses to Trump in nominating contests on Tuesday, Cruz praised Fiorina as a principled fighter for conservative values who knew how to create jobs and would be a valuable ally on the campaign trail."She is careful. She is measured. She is serious," Cruz said. "She doesn't get rattled."Fiorina, 61, dropped her own White House bid in February after a lackluster seventh-place finish in New Hampshire's first-in-the-nation primary. She endorsed Cruz, a 45-year-old US senator from Texas, a month later and has been a sharp critic on the campaign trail of likely Democratic nominee Hillary Clinton.Cruz's unusually early announcement of a running mate appeared to be a bid to recover from Tuesday's losses, which moved Trump closer to the 1,237 delegates he needs to win the nomination at the July 18-21 Republican convention in Cleveland. The nominee will face the Democrats' pick in November's general election.Traditionally, the winners of the Republican and Democratic presidential races announce their running mates in the period between clinching the nomination and the summer national conventions.But Cruz needs help after Tuesday's drubbing by Trump, 69, in all five Northeastern states that held primary elections: Pennsylvania, Maryland, Delaware, Connecticut and Rhode Island.The choice of Fiorina, a former Hewlett-Packard Co chief executive who, like Trump, has never held elective office, could help Cruz with women voters, a group that Trump has had difficulty winning over to his outsider campaign.It also could offer Cruz a boost in the June 7 primary in California, where in 2010 Fiorina won the Republican primary for the US Senate. She was defeated in the subsequent general election by incumbent Democrat Barbara Boxer.'WASTE OF TIME'In a statement, Trump was scornful of Cruz's decision to pick a running mate, calling it "a pure waste of time" and "a desperate attempt to save a failing campaign by an all-talk, no-action politician.""Cruz has no path to victory. He is only trying to stay relevant," the New York billionaire and former reality TV star said.Trump and Fiorina tangled on the campaign trail during her White House race. After Trump insulted her looks in an interview - "Look at that face. Would anyone vote for that?" - she sternly rebuked him in a debate."I think women all over this country heard very clearly what Mr. Trump said," Fiorina said last September.A breast cancer survivor who lost a stepdaughter to drug addiction, Fiorina served as Hewlett-Packard CEO from 1999 to 2005. She was forced to resign amid weak earnings as the company struggled to digest a $19 billion merger with then-rival Compaq Computer Corp.Her campaign never took off in the original, crowded 17-member Republican presidential field, and she was mostly relegated to the early second-tier debates for low-polling candidates.Some conservatives applauded the choice. Marjorie Dannenfelser, president of the Susan B. Anthony List, which works to elect political candidates who oppose abortion rights, said Fiorina was the "ideal" choice."She will take Hillary Clinton head-on," Dannenfelser said in a statement.If she is nominated, Fiorina would become the third woman to win a major-party vice presidential nomination. She would follow Geraldine Ferraro, who ran with Democrat Walter Mondale in 1984, and Sarah Palin, who ran with Republican John McCain in 2008. Both tickets lost in the general election.Clinton would be the first woman to be the presidential nominee of a major party.