US vice presidential candidates face off in only debate 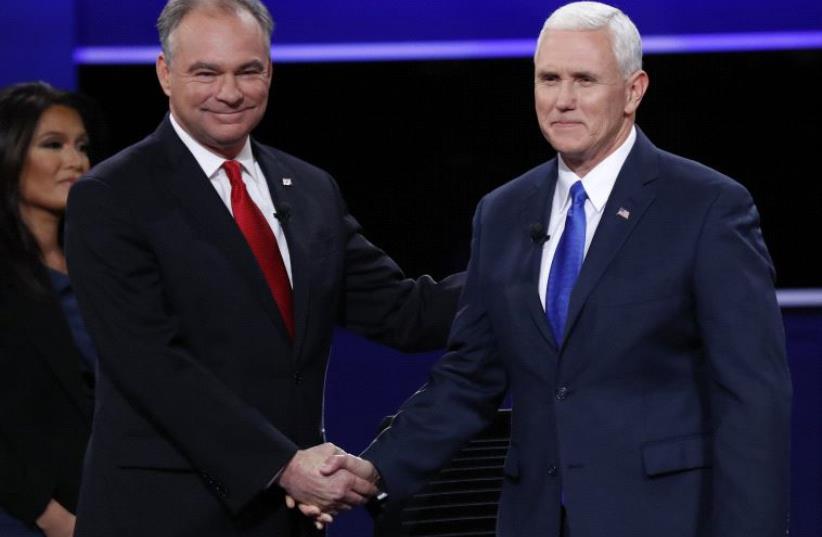 Democratic US vice presidential nominee Senator Tim Kaine shakes hands with Republican US vice presidential nominee Governor Mike Pence (R)
(photo credit: REUTERS)
Advertisement
FARMVILLE, Va. - Democrat Tim Kaine accused Republican presidential nominee Donald Trump of breaking a promise to release his tax records in a debate on Tuesday where the vice presidential contenders bickered and interrupted each other.Trump's vice presidential nominee, Mike Pence, defended Trump days after a New York Times report gave ammunition to the Democratic case against Trump by reporting he may not have paid federal taxes for 18 years.The debate at Longwood University in Farmville, Virginia, was lively from the start as Kaine, the running mate of Democratic presidential nominee Hillary Clinton, honed in on Trump's refusal thus far to reveal his tax records, saying he had broken a promise to do so.Trump has said they are under federal audit."Governor Pence had to give Donald Trump his tax returns to show he is qualified to be vice president. Donald Trump has to give his tax returns to show he is qualified to be president," Kaine said.Pence, who has a low-key style compared to Trump's signature bombast, said Trump as a New York real estate developer had created thousands of jobs and had used US tax laws as they were designed to be used."Why won't he release his taxes?" Kaine shot back.The two candidates talked over each other so much in a bid to score points that the debate moderator, CBS News' Elaine Quijano, intervened."The people at home can't understand either one of you when you speak over each other," she said.The debate came at a crucial time for both campaigns. Clinton is seeking to take advantage of Trump's tax report last week to build on her lead in national opinion polls. Trump needs to rebound from a rocky performance in his first debate with Clinton last week with their second encounter coming up on Sunday in St. Louis.The two vice presidential candidates wasted no time in launching broadsides against Trump and Clinton in the opening minutes of their debate."Donald Trump always puts himself first," Kaine, a US senator from Virginia, said, pointing out that when Trump began his presidential campaign last year he called "Mexicans rapists and criminals" and had also voiced the "outrageous lie" that Democratic President Barack Obama was not born in the United States.Pence, the governor of Indiana, shot back at Kaine that he and Clinton "would know a lot about an insult-driven campaign" and then accused Clinton, the former US secretary of state, of bungling foreign policy with large sections of the Middle East "literally spinning out of control."Social media was abuzz shortly before the debates when the Republican National Committee prematurely published a webpage proclaiming Mike Pence the debate's winner, two hours before the event began. It was taken down shortly thereafter.

So the RNC has already declared Mike Pence tonight's winner saying "the consensus was clear after the dust settled." https://t.co/H7LOT8Ckrj pic.twitter.com/C6HVzwE6wc