'What is Aleppo?' asks US Libertarian Party candidate

The embarrassing exchange followed a forum on Wednesday night in which Democrat Hillary Clinton and Republican Donald Trump tried to showcase their national security and defense credentials. 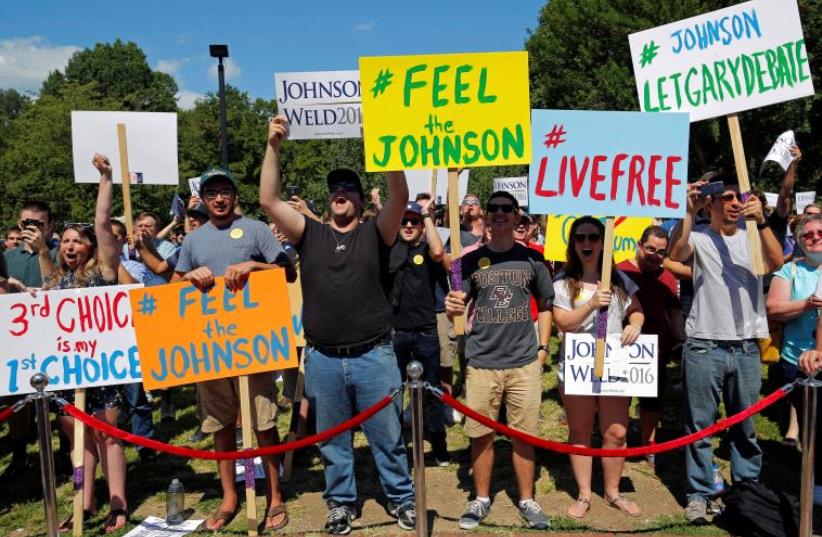 Supporters cheer at a campaign rally with Libertarian presidential candidate Gary Johnson and vice presidential candidate Bill Weld.
(photo credit: REUTERS)
Advertisement
WASHINGTON - Gary Johnson, the Libertarian Party candidate in the 2016 US presidential race, was questioned about a major flashpoint of the Syrian civil war on Thursday and asked, "What is Aleppo?"The gaffe came during an MSNBC interview about the Syrian crisis and the ongoing battle in that country's biggest city, Aleppo, which has been divided for years into government and rebel sectors."What would you do, if you were elected, about Aleppo," Johnson was asked."About Aleppo. And what is Aleppo?" he responded."You're kidding?" the MSNBC interviewer said."No," Johnson said."Aleppo is in Syria. ... It's the epicenter of the refugee crisis," the interviewer said."OK, got it. Got it," Johnson said.


The embarrassing exchange followed a forum on Wednesday night in which Democrat Hillary Clinton and Republican Donald Trump tried to showcase their national security and defense credentials.Johnson, a former Republican governor of New Mexico, has been trying to turn the two major candidates' negative approval ratings to his advantage in the race to win the Nov. 8 election.The Libertarian Party promotes civil liberties and a small-government agenda. In his campaign, Johnson has pledged to cut spending, stick to conservative fiscal policies and legalize marijuana.A current average of opinion polls by website RealClearPolitics shows that in a four-way matchup featuring Clinton, Trump, Johnson and Green Party candidate Jill Stein, Johnson has 8.6 percent support.