'Brotherhood claims Mursi in lead with 69% of vote'

By JPOST.COM STAFF, REUTERS
JUNE 16, 2012 20:19
Muslim Brotherhood candidate Mohamed Mursi 370
(photo credit: REUTERS)
Advertisement
The campaign team of Muslim Brotherhood candidate Mohamed Mursi claimed Saturday that he had won 69 percent of the vote after the first-day of a two-day run-off election to determine Egypt's first freely-elected president in the country's history, Egyptian daily Al-Ahram reported.Mursi is facing Ahmed Shafiq, who served as former Egyptian president Hosni Mubarak's prime minister in the final days of his rule.Reeling from a court order two days ago to dissolve a new parliament dominated by the Muslim Brotherhood, many question whether generals who pushed aside fellow officer Mubarak last year to appease the pro-democracy protests of the Arab Spring will honor a vow to relinquish power by July 1 to whoever wins."Both are useless but we must choose one of them unfortunately," said Hassan el-Shafie, 33, in Mansoura, north of Cairo, exasperated like many who picked centrists in last month's first round and now face a choice between two extremes. 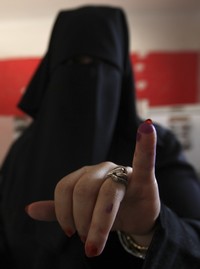 With neither a parliament nor a new constitution in place to define the president's powers, the outcome from Saturday and Sunday's run-off will still leave 82 million Egyptians, foreign investors and allies in the United States and Europe unsure about what kind of state the most populous Arab nation will be.Both contenders may herald further turbulence. An Islamist president will face a mistrustful army, while a victory by a Mubarak-era general will rile the revolutionaries on the street.A result may emerge within hours of polls closing on Sunday. Turnout in the first round last month was only 46 percent. An election official said Saturday's voting had been steady.Many fear the Brotherhood will not accept a defeat quietly and a Shafiq win could touch off new unrest on the streets, forcing the army to take sides to impose order and further unsettle a heavyweight state at the heart of a troubled region. 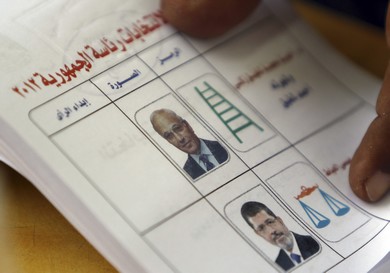 The Brotherhood has warned of "dangerous days" and said a Shafiq win could wipe out the gains of the revolt. It listed poll violations, including conscripts voting although they are barred. Election officials said any such violators were stopped.Reflecting its suspicions, one Brotherhood official said many of the group's supporters would vote on Sunday to avoid any tampering with ballot boxes overnight.International monitors gave guarded approval of the first round vote last month and Egyptian groups listed a range of mostly only minor violations on Saturday.