Members of far-right groups from throughout Europe protest against influx of Islamic immigrants to European countries.

By REUTERS, JPOST.COM STAFF
MARCH 31, 2012 18:21
Anti-Islamic rally in Denmark_370
(photo credit: Fabian Bimmer/Reuters)
Advertisement
A long-planned gathering of far rightwing movements from across Europe met in Denmark on Saturday to try to form a pan-European anti-Islamist alliance, a project that will test the cohesion of a fringe trying to build support built on fears about immigration and militant Islamists.Members of European far-right groups, including the English Defense League (EDL) and the German Defense League, arrived in the Danish city of Aaruhus for the rally, which was expected to draw anti- Islamic crowds from Russia, Finland, France, Germany, Norway, Poland, Romania and Sweden, according to the Guardian. 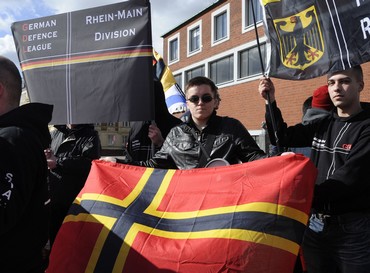 Members of the German Defense League (Reuters)The meeting, eight months after anti- Islam fanatic Anders Behring Breivik killed 77 people in Norway, tested whether these groups are recovering from the political blow Breivik dealt them, and whether they can coordinate internationally.Their detractors say these fringe groups, with members often associated with violent incidents, are racists seeking to latch on to tensions over immigration in Europe. 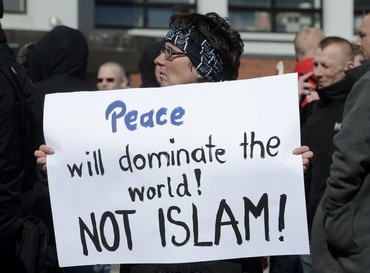 A woman holds an anti-Islamic banner in Denmark rally (Reuters)“We’re not expecting big numbers in Aarhus,” Stephen Lennon, the head of the EDL, one of the biggest groups behind the gathering, told Reuters, adding that a few hundred people would attend. “We hope it will be the start of a European movement that will continue to grow.”The EDL, which claims to have thousands of members, says its mission is “to protect the inalienable rights of all people to protest against radical Islam’s encroachment into the lives of non-Muslims.” 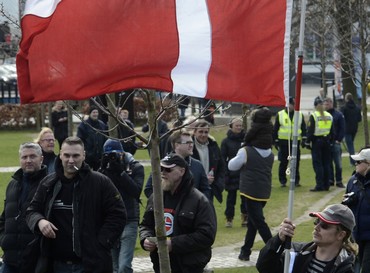 Members of the Danish Defense League in Aahrus (Reuters)Peter Knoope, director of the Netherlands- based International Center for Counter-Terrorism, said the murders in France by al-Qaida-inspired gunman Muhammed Merah “will be exploited in terms of propaganda... What they [the rightists] are trying to do is to influence the political arena.”Aahrus Mayor Jacob Bundsgaard said last week that extremists were not welcome in Aahrus.“Let them come, and let them go away again without much ado,” the Guardian quoted him as saying. 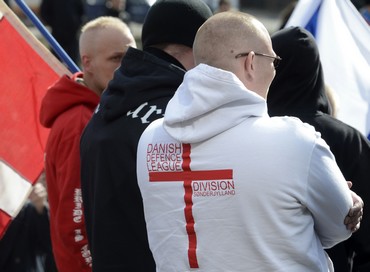