US missions in Yemen, Egypt attacked over film

Some 50 people demonstrate at US embassy in Tel Aviv; Saudi Arabia condemns both film and violence against US.

By REUTERS, BEN HARTMAN
Egyptians protest at US embassy 390
(photo credit: Mohamed Abd El Ghany / Reuters)
Advertisement
Demonstrators attacked the US embassies in Yemen and Egypt on Thursday in protest at a film they consider blasphemous to Islam and American warships headed to Libya after the death of the US ambassador there in related violence earlier in the week. In Tel Aviv, some 50 protesters demonstrated against the film outside the US embassy .The protesters flew flags of the Islamic Movement in Israel outside the embassy. Demonstrators said they came from across the country to express their anger at the YouTube clip, which they said disrespected the prophet. 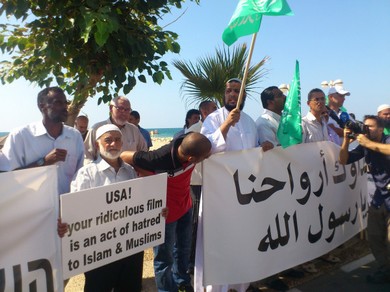