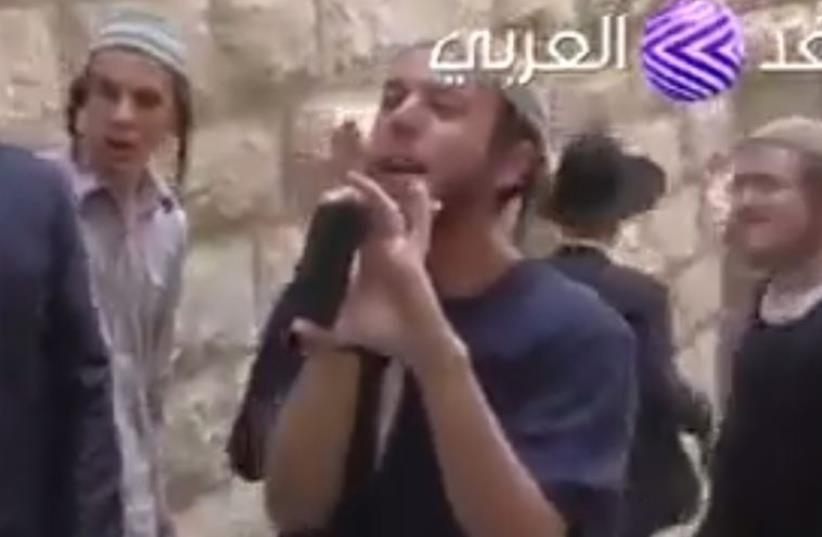 Youth arrested after yelling, 'Muhammad is a pig' near Temple Mount‏
(photo credit: PALESTINIAN MEDIA)
Advertisement
Three Jewish visitors were arrested on the Temple Mount in Jerusalem on Sunday morning for incitement and disturbing the public order, police said.One suspect reportedly exclaimed “Muhammad is a pig” while being insulted by an Arab mob shouting anti-Semitic slurs, while the second Jewish suspect, a 14-year-old boy, was arrested for incitement for donning his tzizit over his shirt. A third was detained for reportedly singing a Jewish song.Sunday’s arrest marks the fourth time in less than one month that a Jew has been arrested for slandering the Prophet Muhammad amid heckling by hostile Muslim groups.On the heels of Sunday’s arrests, Emek Shaveh, a leftwing consortium of archeologists, claimed tensions were further inflamed when government inspectors from the Israel Nature and Parks Authority began fencing off a Muslim cemetery adjacent to the Temple Mount.According to the NGO, the cemetery, known as Bab al-Rahmeh, is being cordoned off as a means to limit the number of Muslims near the contested holy site, and to cease the cemetery’s eastward expansion.“We understand these works as continuing the trend to limit the non-Jewish presence around the holy compound, and part of a long struggle between settlers and Palestinians over control of the eastern wall of the esplanade,” the group said.“In response to the works today, Emek Shaveh contacted the legal department of the INPA , asking whether the work is coordinated with the Antiquities Authority. If not, the concern is that the INPA itself is harming the antiques.”Noting that the cemetery has long served as a flashpoint in Arab and Jewish tensions, the NGO stated that the fence breaches “the delicate status quo between the Israeli authorities and Palestinians regarding the perimeter around the Temple Mount.”While Bab al-Rahmeh cemetery is included in the Jerusalem Walls National Park, the Christian and Jewish cemeteries on the Mount of Olives are not.Therefore, the Muslim cemetery’s inclusion within the park’s borders now “enables the INPA to operate in the cemetery under the National Parks Act, to fence it in, restrict access to it, and to strive to stop burial there,” the NGO said.“All this is being done in the claim of protecting ancient remains,” Emek Shaveh alleged.A spokesperson for the INPA could not be reached for comment.