Erekat spoke with Sputnik in advance of his scheduled meeting in Moscow with Foreign Minister Sergey Lavrov on January 13. 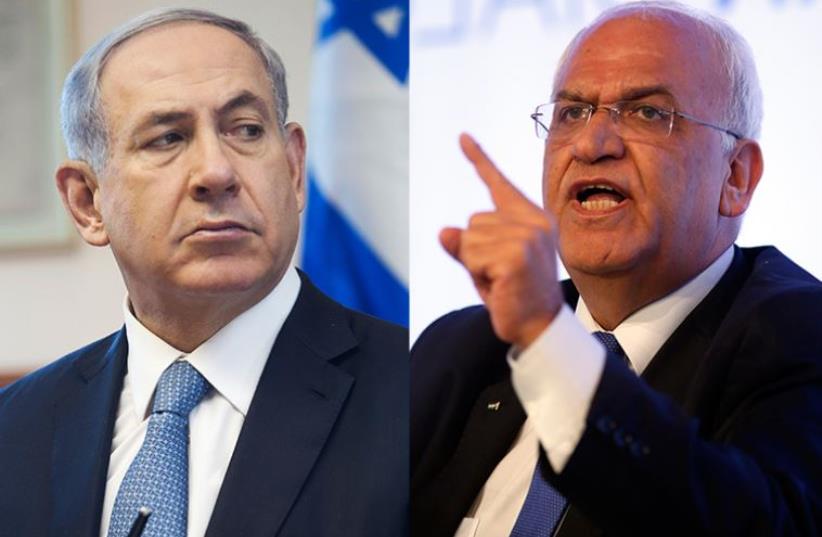 Netanyahu and Erekat
(photo credit: REUTERS)
Advertisement
Palestinian Authority President Mahmoud Abbas would be willing to meet with Prime Minister Benjamin Netanyahu in Moscow, PLO Executive Committee Secretary- General Saeb Erekat said in an interview he gave to the Russian news agency Sputnik on Saturday.“Russian President Vladimir Putin’s proposal to hold a tripartite meeting in Russia affirms that Moscow realizes the importance of resuming the peace process and negotiations and President Abbas accepted the invitation, while Israeli Prime Minister Benjamin Netanyahu refused it. We as Palestinians deeply value all of Russia’s positions on this issue,” he said.“When the meeting was postponed after President Putin’s first invitation, Russia affirmed that it was ready to hold a new meeting and we informed our Russian friends that the Palestinian side is ready to accept the invitation,” Erekat added.Since the US-led peace talks between Israelis and Palestinians fell apart in April 2014, the Palestinians have refused to negotiate with Israel until it halts all settlement activity and Jewish building in east Jerusalem.Israel, in turn, has insisted that it wants to hold talks without preconditions, and an Israeli official told The Jerusalem Post that Netanyahu would be willing to go anywhere to meet with Abbas, including Moscow.The United Nations Security Council resolution condemning Jewish building over the pre-1967 lines was predicated on the belief that direct talks cannot occur at this time.Similarly, the 77 countries that plan to send representatives to the international peace conference in Paris on January 15 are looking to preserve the option for a two-state solution until such time as peace talks can occur.Erekat spoke with Sputnik in advance of his scheduled meeting in Moscow with Foreign Minister Sergey Lavrov on January 13.He told Sputnik that the meeting was part of the ongoing cooperation and coordination between Palestine and Russia.“We have a joint committee that meets routinely to coordinate the peace process and [discuss] what is happening in the region with our friends in Russia,” said Erekat.Erekat thanked Russia for voting in December in favor of UN Security Council Resolution 2334 on Israeli settlement activity.