Europe, Arabs to unite against Israel at UN Security Council

US Ambassador to the UN Nikki Haley and Israel’s Ambassador Danny Danon will speak before the 15-member body.

By TOVAH LAZAROFF
DECEMBER 8, 2017 02:04
The United Nations Security Council votes, November 17, 2017
(photo credit: REUTERS)
Advertisement
European countries, Egypt and Russia are slated to rail against US President Donald Trump’s declaration that Jerusalem is Israel’s capital, when the United Nations Security Council holds a meeting on the matter in New York on Friday.PLO Ambassador to the UN Riyad Mansour called on the council “to act swiftly” to avoid “this extremely dangerous situation, which constitutes a threat to international peace and security,” according to the Palestinian news agency WAFA.The Palestinians have argued that the declaration, including the decision to relocate the US Embassy from Tel Aviv to Jerusalem, runs counter to past Security Council decisions, including Resolution 242 passed in 1967 and Resolution 2334 approved in December 2016.It also goes against Security Council Resolution 478, approved in 1980, which specifically called for embassies not to be located in Jerusalem.These texts reject Israeli sovereignty in Jerusalem, particularly in area over the pre-1967 border.It’s expected that the US, one of five Security Council countries with veto power, would block any action against Israel. 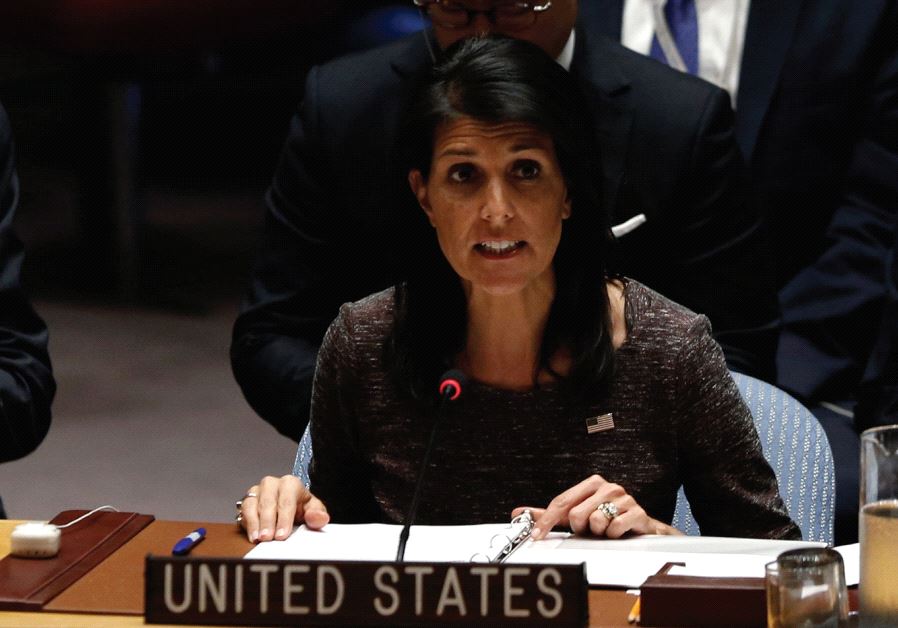 US AMBASSADOR to the United Nations Nikki Haley speaks following a vote at the Security Council (Reuters)The request for the meeting was put forward by Bolivia, Egypt, France, Italy, Senegal, Sweden, the United Kingdom and Uruguay.
Prime Minister Benjamin Netanyahu praises "historic" Trump decision on Jerusalem
It’s expected that Mansour, US Ambassador to the UN Nikki Haley and Israel’s Ambassador Danny Danon will also speak before the 15-member body.Danon said, “Instead of criticizing this decision, now is the time for all the members of the council, and all countries, to also recognize Jerusalem as Israel’s capital and begin moving their embassies as well.”US Secretary of State Rex Tillerson said on Thursday that the embassy’s relocation would take time.“We are not going to be doing that quickly. We have to acquire a site. We have to develop building plans. We’ll have to construct the building. So this is not something that will happen overnight,” Tillerson said.He recalled that Trump had clarified that the declaration was not a statement about the boundaries of the city.US President Donald Trump and Vice President Mike Pence arrive for Trump to deliver remarks recognizing Jerusalem as the capital of Israel at the White House in Washington, US December 6, 2017 (Reuters)Trump “also reaffirmed our strong belief that the status quo of the holy sites must be maintained, which recognizes the rightful role of the various countries around those sites. He also affirmed our support for a two-state solution if that’s what the parties believe they are ready to agree to. And he also made a statement [that] the final status of Jerusalem is something that is left for the parties to negotiate,” Tillerson said.Earlier this year Russia recognized that west Jerusalem was Israel’s capital – it was the first country to do so. On Wednesday the Czech Republic also stated that west Jerusalem was Israel’s capital.Trump did not geographically define territory when issuing his declaration, but rather, left the definition vague, so that it would be possible to presume he was not referring to all of the city.