Greenblatt arrives in Israel for his first major diplomatic test

Palestinian officials will boycott US envoy due to US President Trump's Jerusalem declaration. 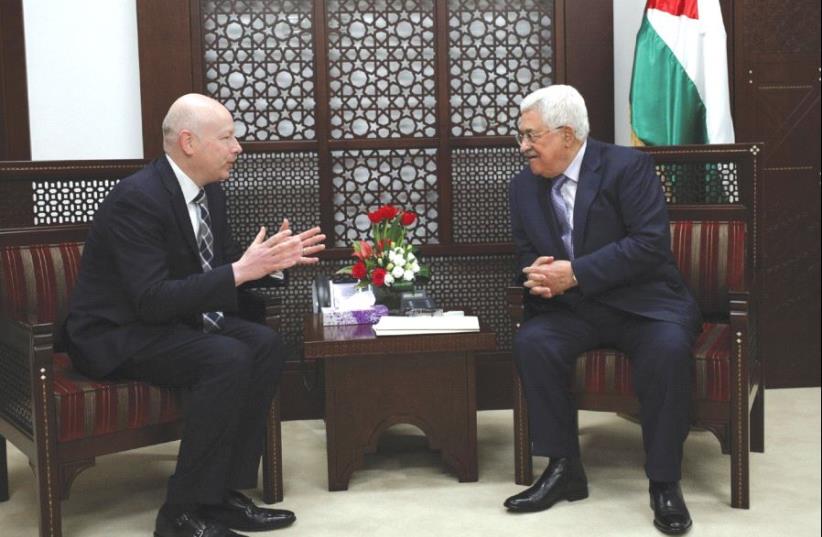 PALESTINIAN AUTHORITY President Mahmoud Abbas meets with Jason Greenblatt, US President Donald Trump’s Middle East envoy, in Ramallah.
(photo credit: REUTERS)
Advertisement
WASHINGTON – Arriving in Israel missioned by US President Donald Trump to lay the groundwork for direct Israeli-Palestinian negotiations, Jason Greenblatt, the president’s special envoy to the peace process, will face his first major diplomatic test this week as one of the two sides critical to his effort refuses to meet with him.Furious over Trump’s decision to recognize Jerusalem as Israel’s capital on December 6, Palestinian Authority leaders said they have no intention to receive the US envoy, whose job over the past year has been in part to earn credibility with them and their skeptical public. The Jerusalem decision has unquestionably complicated Greenblatt’s effort, at least in the short term, senior administration officials acknowledged. But he is undeterred.Greenblatt, alongside the president’s son-in-law and senior adviser Jared Kushner, has been working on a detailed plan that has already produced hundreds of pages of work, full of US proposals addressing dozens of sticking points in the Israeli- Palestinian conflict. His purpose on this current trip is to continue building that structure, on which a peace initiative will ultimately rest, a White House official told The Jerusalem Post.His visit is “not about repairing relations – it’s about moving forward with this plan,” the official said on Tuesday.“It is a missed opportunity if they don’t want to meet – but we’re not going to pressure them and push for it. We’re going to keep our heads down and continue on.”
Trump Middle East Envoy Jason Greenblatt meets with PA President Abbas on March 14, 2017 (credit: REUTERS)
Ahmad Majdalani, a PLO executive committee member, confirmed that the Palestinians would boycott the American envoy. “No one from the Palestinian side is going to meet with Jason Greenblatt officially or unofficially.”Greenblatt has faced challenges before, managing Israelis and Palestinians through a water crisis, violence at the Temple Mount, and complications over political reconciliation between Fatah and Hamas. But no event thus far in Greenblatt’s short career in government has so directly challenged him as a diplomat to keep both sides at the table, and to carry on their negotiations.He is betting the Palestinians will eventually move on, coming to appreciate America’s vital role in their effort to achieve sovereignty through peaceful dialogue with Israel – and that the administration’s peace plan, once revealed, will speak for itself in its seriousness and its depth.“We can weather this, and we believe that at the end of the day people will realize the president’s action will benefit peace,” the official said, adding that fallout from the Jerusalem move “has neither affected the timeline or the substance” of the peace effort.There are no timeline or deadlines governing that effort, although Kushner and Greenblatt expect that “targets” will ultimately determine the pace of direct negotiations – should they ever occur.The Trump administration has butt heads several times with the PA in recent weeks, threatening to close its offices in Washington over its moves against Israel at the International Criminal Court, announcing the US intent to initiate the relocation of the American Embassy from Tel Aviv to Jerusalem, and just this week, announcing its belief that the Western Wall will ultimately remain under Israeli sovereignty.These decisions were not made as part of Kushner and Greenblatt’s effort to forge Mideast peace, but on a political basis, with both men involved and supportive but primarily amongst Trump and his vice president, Mike Pence, who is also scheduled to visit Israel next month.Nevertheless, it is Kushner and Greenblatt who are tasked with managing the fallout, and with ensuring their plan survives politics to lift off the ground. That is the real purpose of Greenblatt’s trip, officials said.Greenblatt will be in Israel for several days of meetings.