"We want to feel safe again," says resident of Halamish. 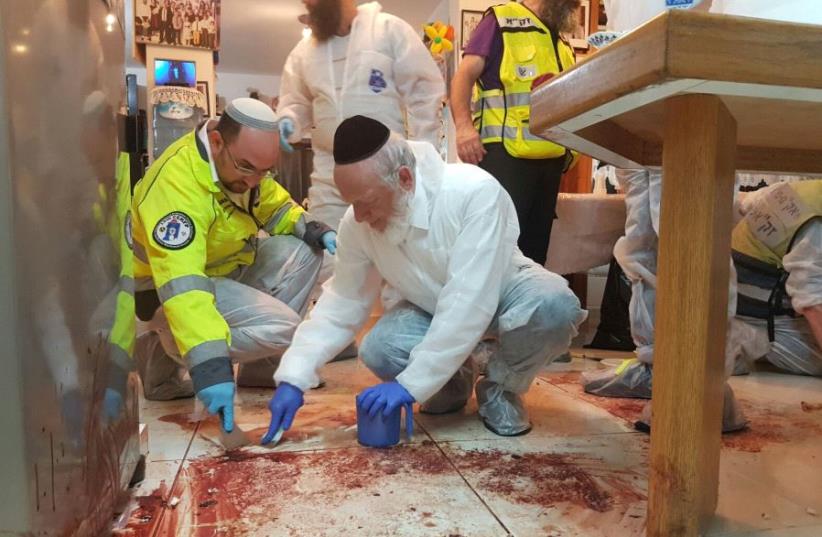 Scene of terror attack in Halamish
(photo credit: ZAKA)
Advertisement
Chaya Salomon’s screams for help alerted her neighbors to the terrorist attack taking place inside her parents’ home in the settlement of Halamish (Neveh Tzuf) on Friday night.Already fatally stabbed, the 46-year-old teacher managed somehow to make it outside the door of the single-family home located on the edge of the settlement.Across the small paved road, the Maoz family was in the middle of their Friday night dinner when they heard Chaya’s voice and went outside to investigate.On Sunday, Miri Maoz Ovadia sat on the walkway of her parents’ home and spoke with reporters about the attack that killed Chaya, as well as her brother Elad, 36, and their father, Yosef, 70.
Three Israelis were killed in a stabbing attack in Halamish, July 21, 2017 (Reuters)
Red police tape surrounded the structure and an Israeli flag fluttered by the walkway.Memorial candles were placed on a small plastic table by the driveway.Ovadia’s parents, Shimon and Rachel, and her three youngest siblings were home at the time, including a brother who serves in the elite Oketz canine unit but who was off duty.“At a certain point during the meal they heard shouts and screaming and went out to see what was going on. Then when they saw Chaya lying on the [ground] they realized it was a terrorist [attack].“They ran inside to bring their guns. My younger brother, who is a trained soldier, jumped over the bush here, [saw] the terrorist through the window and shot one bullet, [wounding] the terrorist.”At the time of the attack the Salomon family had just set the table for a celebration to mark the birth of their grandson on Thursday and had invited the whole community to join them.So the door was unlocked and they expected people to walk in.It was precisely at this moment that Omar al-Abed, 19, of the nearby village of Kobar, had jumped over the security barrier and tripped the alarm.But because he hadn’t cut the through the fence, the security guard who came to investigate initially believed it was a false alarm.Abed did not immediately look like an attacker. He had disguised himself to look like a religious Jew. He wore a white shirt and skullcap, and arrived at the family home just as they were about to start the celebration He knocked on the door and they let him in, because they were expecting people and he was one of the first, Miri said.Almost immediately he took out a knife. Elad’s wife, Michal, was able to escape upstairs with her five children. Tovah, Yosef’s wife, was also wounded but survived the attack, managing to escape upstairs.Ovadia, who lives nearby with her husband, Shlomo, and their two small children, was unaware of the attack until her phone rang, something that is unusual on Shabbat, given that phone use is forbidden.It was her mother who told her “there are terrorists in the home of the Salomon family.”Her husband, Shlomo Ovadia, added, “I heard the words ‘terrorist’ and ‘Salomon’ and I ran outside.”Shlomo arrived at the home at the same time as the first medical responders and helped ascertain that the house was safe and attempted to treat the victims, including Elad.Michal came downstairs, saw her husband lying there and asked them to help save him, but it was not possible, Shlomo said.Families were alerted by SMS to remain in their homes and a siren was sounded.“We continued to update the residents,” said Ovadia, who also works as a spokeswoman for the Binyamin Regional Council.The attack is the third incident for Halamish. In 2016, 18 homes were destroyed by arson set by Palestinians. Three years ago, two Palestinians infiltrated her parents’ home, located across the street from the Salomon family. They had knives, but they fled after a short struggle with the family members in the house.The police said they believed the incident was criminal, but the community said it was an attempted terrorist attack.Ovadia and her husband, Shlomo, explained that the community wants the army to provide security cameras and a smart fence.“We went through a serious trauma over the last weekend and we want to feel secure again, to feel safe like anywhere else in Israel,” she said.