Where is Hezbollah getting its US-made APCs from? 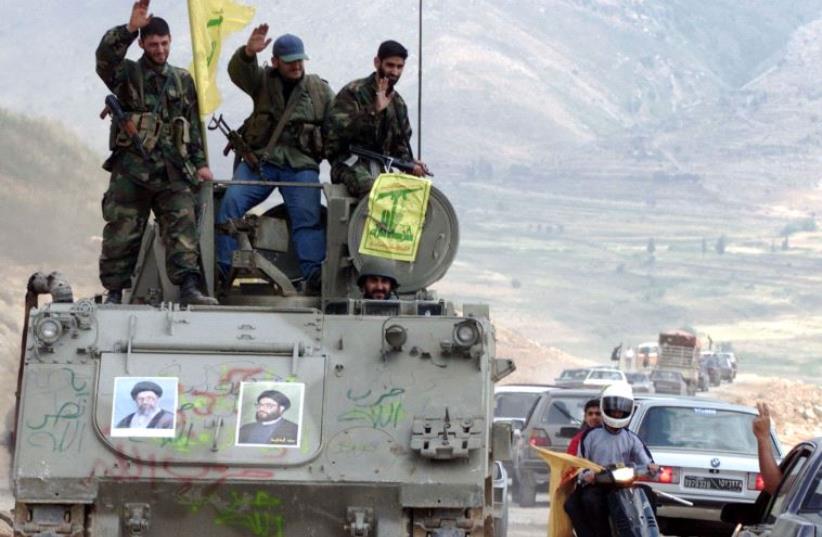 Pro-Iranian Hezbollah guerrillas, riding on an APC M113 used by pro-Israeli militiamen, wave to passing motorists as they drive in the former Israeli security zone in the Tell Nahas area of south Lebanon May 26, 2000.
(photo credit: REUTERS)
Advertisement
It was Hezbollah’s first-ever military parade on foreign soil. And it showed off.Images of the parade, which was held last Sunday in the Syrian city of Qusayr, showed a wide array of the terrorist group’s artillery: Soviet-made T-72 tanks, Russian Kornet anti-tank missiles, armored personnel carriers, rapid response motorcycles and KS-12A anti-aircraft weapons.But the most significant and worrisome vehicles on display were the American- made M113 armored personnel carriers (APCs), the type provided to the Lebanese Armed Forces by the United States, prompting many analysts to speculate that the group may have received them from the LAF.Hezbollah military parade in Syria (Arab media)This past summer, the LAF received 50 armored vehicles, 40 artillery pieces and 50 grenade launchers from the United States. The arms were part of an aid package to bolster Lebanon. Both the LAF and the State Department have denied that the M113s seen in the parade were taken from them, adding that they are looking into how Hezbollah acquired the vehicles.The images of the parade is a first for Hezbollah, which has in the past never permitted these types of pictures to be shared, trying to keep their weaponry a highly guarded secret.Hezbollah is said to be in its worst financial shape in decades, and has lost at least four prominent figures since January 2015, killed either fighting Syrian insurgents or in alleged Israeli air strikes.Nonetheless, Hezbollah continues to significantly build up its power, both in terms of its ability to mobilize fighters and also its arsenal. Some estimates say the group has 100,000 short-range rockets and several thousand more missiles that can reach central Israel, including Tel Aviv.According to some Israeli analysts, the next war with Hezbollah might see 1,500- 2,000 rockets shot into Israel per day, compared with the 150-180 per day during the Second Lebanon War 10 years ago.According to Hezbollah Deputy Secretary- General Naim Qassem published in the Lebanese daily Al-Safir, Hezbollah “now has a heavily armed and welltrained army and the resistance does not need to rely on guerrilla tactics. We have acquired well-developed expertise to protect Lebanon and the interest of Lebanon.This military parade is a clear and visible message to everyone and there is no need for clarification or interpretation of the meaning of that message.”Hezbollah’s first-ever military parade on foreign soil, held in the Syrian city of Qusayr.Hezbollah denied Qassem’s statements, releasing a statement reading that “Hezbollah’s press bureau wishes to clarify that what was published Wednesday in Al-Safir did not appear in the text delivered by the deputy secretary-general of Hezbollah,” the group said in a statement.Since the last war between Israel and Hezbollah in 2006, the border has seen relative quiet. Nonetheless, the IDF sees this border as the most explosive.
Hezbollah video
While the IDF and the LAF have relative good relations in order to prevent confrontations, a senior IDF officer told The Jerusalem Post that the next war with Hezbollah “will be a real war,” no longer against a militia, but a full-fledged and powerful army, with varying levels of fighting capabilities that include both guerrilla and conventional tactics.