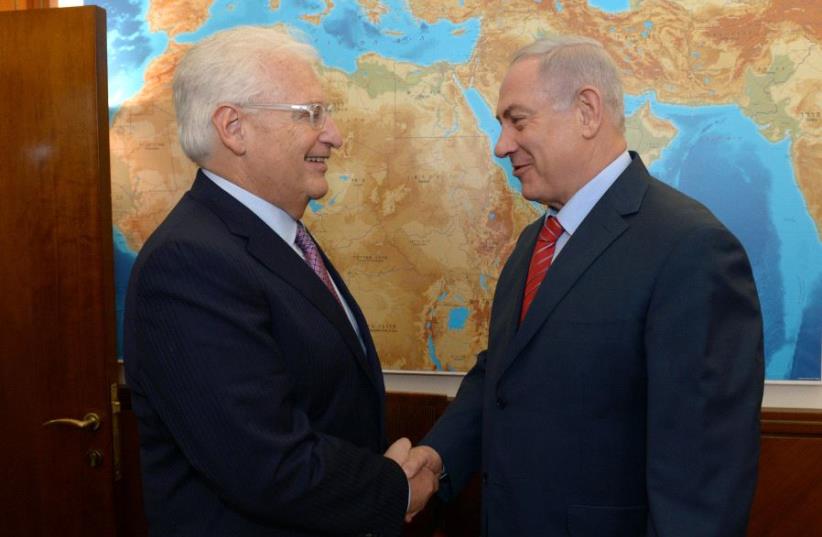 Prime Minister Benjamin Netanyahu meets with US Ambassador to Israel David Friedman.
(photo credit: HAIM ZACH/GPO)
Advertisement
The security cabinet met in a late night session Sunday to discuss ways to deal with escalating Temple Mount tension, amid efforts by the US, Jordan and Egypt to find a way out of the crisis.Public Security Minister Gilad Erdan said in a Facebook post before the meeting, however, that Israel should not give in to “threats and violence.”He said Israel should not remove the metal detectors placed there last week to the fury of the Palestinians and parts of the Muslim world until the police approve another plan to ensure security at the site.The security cabinet meeting came not only against the backdrop of the tension on the Temple Mount and elsewhere, and the terrorist attack at Halamish (Neveh Tzuf) that killed three Israelis, but also against the background of Palestinian Authority President Mahmoud Abbas’s decision to cut security ties with Israel until it reverses its decision regarding the metal detectors.“This decision is not at all easy, but the Israelis ought to know that they are going to be the ones who will ultimately lose, because we do a lot to defend their security and ours. We are convinced that terrorism must be fought everywhere, but the metal detectors must be removed,” Abbas said.Speaking at a convention of scientists in Ramallah, Abbas reiterated: “We will not allow the electronic gates to continue [to be placed] there. Sovereignty is our full right, and we need to supervise al-Aksa [Mosque] and stand guard at its gates. There is no right to place these metal detectors,” he said.Defense Minister Avigdor Liberman responded to the Palestinian decision by telling Ynet that Israel has managed for many years without PA security cooperation, “and we’ll manage now as well.”He said the security cooperation was “first and foremost” a Palestinian interest, and that if they want the cooperation, it will continue, but if they don’t, then it will end.“It’s their decision,” he said.In the meantime, the police on Sunday erected security cameras at the Lions’ Gate, where most Muslims enter the Temple Mount to pray.The cameras are reportedly able to detect whether or not individuals are armed with guns, knives or other weapons as they approach, allowing security personnel to identify and detain them before they have a chance to attack.Meanwhile, on the diplomatic front, Channel 2 reported that efforts are underway to get the US to put together a joint Israeli-Jordanian meeting to clamp down on the tensions. According to the report, US Ambassador David Friedman went to Prime Minister Benjamin Netanyahu’s residence Saturday night to discuss the issue.Netanyahu did not address the sensitive metal detectors issue during opening statements he made at Sunday’s weekly cabinet meeting, saying only that security assessments were ongoing.“Since the beginning of the events I have held a series of meetings and situational assessments with all the relevant security officials, including those on the ground,” Netanyahu said.“We are receiving updates and also recommendations and we are acting according to these,” he continued. “We are acting calmly, with determination and responsibly, and will continue to so in order to maintain security.”Netanyahu expressed the condolences of the cabinet to the Salomon family on the murder of Yosef, Chaya and Elad, who he said were killed by a “beast incited by the hatred of Jews.”The prime minister said the security forces were operating as needed on the ground, and the terrorist’s home would be destroyed “as soon as possible.”“We are also acting against those who incited to murder,” he said.Later in the day, at the state memorial ceremony for Ze’ev Jabotinsky, Netanyahu said Friday night’s attack in Halamish was “the fruit of deep and unbridled Jew-hatred. We have been dealing with murderous terrorism for 100 years – and we will defeat it.The pain is deep but our roots in the land are no less deep. Terrorism will never defeat us. We will continue to strengthen our state; we will continue to build up our land.” Jeremy Sharon and Jerusalem Post staff contributed to this report.