Liberman: Syria fighting will be over soon, Hezbollah will turn its sights on Israel 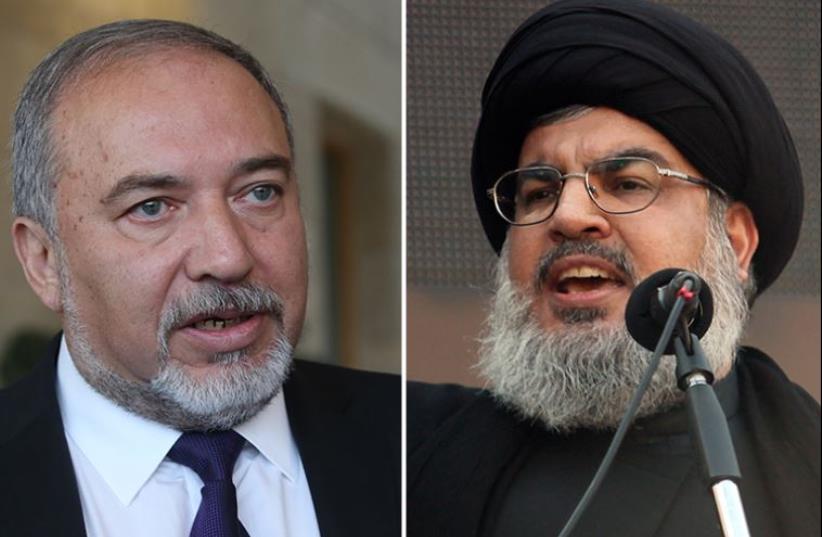 Liberman and Nasrallah
(photo credit: REUTERS,MARC ISRAEL SELLEM/THE JERUSALEM POST)
Advertisement
Yisrael Beytenu chief Avigdor Liberman warned Monday that comments made by Hezbollah chief Hassan Nasrallah over the weekend suggest that the organization intends to set its sights on Israel as soon as it extricates itself from fighting in Syria's civil war.During a rare public appearance in Beirut to mark the Shi'ite Ashura holy day, Nasrallah attacked both Israel and the US, saying that Hezbollah has fought Israel in the past and will continue to do so. "Anyone who thinks that we will retreat or give up- that won't happen. We will win," he vowed.Speaking ahead of a meeting of the Knesset Foreign Affairs and Defense Committee on Monday, Liberman said that he was "very concerned" by Nasrallah's comments."For those who did not understand the meaning of what Nasrallah said, it was: 'We are almost finished in Syria, and we will then be free to deal with you,'" Liberman warned.Liberman estimated that world powers would make an agreement to end the war in Syria within a year, freeing up Hezbollah from the fighting it has been entrenched in defending the regime of Syrian President Bashar Assad for the past four years."We need to take Nasrallah's comments seriously. Because what he said is, 'We and the Iranians will take care of you, just let us finish our work in Syria,'" Liberman said.He attacked the government's handling of security threats, and expressed doubt that it would be able to handle an added threat from an engaged Hezbollah."I think that a government that has exhibited helplessness against Hamas in Gaza and against the wave of terror in Judea and Samaria and Jerusalem is a government that is unable to handle the threats and unable to deal with Hezbollah and the dangers that it poses. Therefore there is room for concern," he said."I hope that the prime minister will address the matter today in the Knesset Foreign Affairs and Defense Committee - Nasrallah's comments and what the conclusions of the defense establishment are. I hope that the government understands the writing on the wall, and we will ask them to show us what they intend to do about it," he added.Nasrallah said during his speech on Friday that Israel was "a tool of the West" that was acting as a "subcontractor for US hegemony in the Middle East.""Israel is a tool that is being used by the West to take control of the Middle East region," the Hezbollah leader said during an event that was guarded by heavy security. "That's why the West defends it.""The Palestinian people, and all the other nations in the region, chief among them the Lebanese, who have suffered from the Israeli occupation and massacres - they are the ones that bear the burden of the American project of domination [of the Middle East]," the Hezbollah chief said. "The US is responsible for the crimes being committed in Palestine."The Hezbollah leader said the US "inherited the old colonialist behavior whose goal is to control the Middle East politically, socially, militarily, and culturally."Nasrallah accused the Americans of wishing to "bring every Muslim under its control so that eventually the nations of the region will recognize Israel."