Man who shot Jerusalem terrorist: Soldiers hesitated to shoot because of Elor Azaria 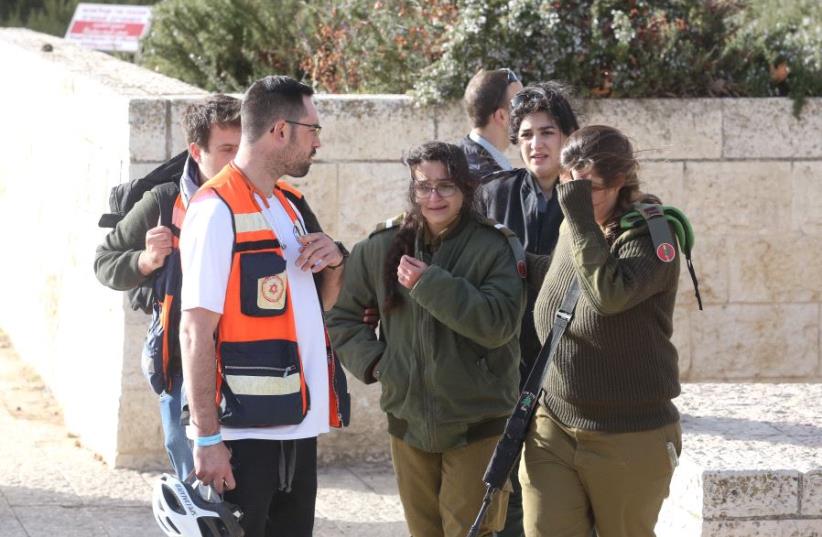 Scene of Jerusalem ramming attack
(photo credit: MARC ISRAEL SELLEM)
Advertisement
A civilian security guard who shot the terrorist during Sunday’s attack said soldiers on the scene were hesitant to shoot, due in part to the manslaughter conviction four days earlier of Sgt. Elor Azaria for killing a downed terrorist.But the IDF Spokesman and a commander at the IDF Officers School contradicted this version of events.Security guard and tour guide Eitan Rund told Army Radio that after the truck drove into the crowd, “I saw the truck go in reverse, and then I realized that it wasn’t an accident.
Jerusalem Terror Attack: Footage of truck ramming into group of people in Armon Hanatziv, Jan. 8, 2017
“I ran toward him [the driver] and emptied my whole clip. He drove backward and onto the wounded again. They were motionless, some wounded and some scared. It wasn’t a good scene.”Rund said that the soldiers were hesitant to shoot at the truck after it slammed into the group of people. The fact that Azaria was convicted of manslaughter for shooting a wounded terrorist was the reason for the hesitation, he said.“There was hesitation to open fire,” he said. “I have no doubt that this was a significant factor, because all they tell them [in the army] recently is to be careful. It could be that a few minutes less of hesitation and the situation would have been better.”But Col. Yaniv Aluf, commander of the IDF Officers School, who carried out a preliminary investigation of the attack, appeared to contradict Rund’s version of events. Aluf’s investigation suggested that at least two cadets fired toward the terrorist at close range.IDF Spokesman Maj.-Gen. Moti Almoz backed this assertion, saying that it was incorrect to say that soldiers hesitated to shoot, or that the Azaria conviction had some bearing on the incident.The soldiers did not understand at first that it was an attack, thinking it was a car accident, he said.“The moment that they realized that it was an attack, two cadets fired toward the truck,” Almoz added.It was not clear if their shots killed the attacker or stopped the attack, but it is clear that they used their weapons, he said.“The army does not know of any soldier who was afraid to shoot because of Azaria,” Almoz said.